By Newsroom on October 16, 2017Comments Off on Millions tune in to watch LSBU chef Barry Johnson win the World Chocolate Masters 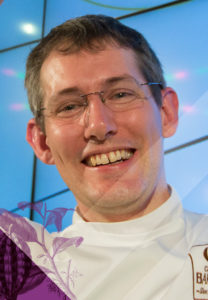 After a day filled with all-sensory excitement created by UK and Ireland’s new generation of highly creative chocolatiers and pastry chefs, the World Chocolate Masters’ jury announced LSBU’s Barry Johnson the winner of the national selections.

Barry displayed incredible attention to detail throughout the competition. The jury praised him for his high standards, outstanding sense of balanced flavours and his imaginative interpretation of the ‘futropolis’ theme.

This year’s theme challenged contestants to think about the future of chocolate delights – specifically how the cities of the future will influence the way we live, eat and enjoy the exquisite delights of chocolate. The judging panel were looking for new chocolate taste combinations, forward-thinking textures and a design language that will define tomorrow’s commercial patisserie and chocolaterie presentation.

Barry’s unflinching attitude completely convinced the jury to send him to the World Chocolate Masters finals in Paris in October 2018, where he will represent the UK and Ireland. There, 21 countries will be represented by their most talented chocolatiers competing in a three-day final that will push them to the limits of their culinary creativity.

For the first time ever, the UK and Irish national selection was live-streamed on Facebook, and over a million viewers watched as the day’s events unfolded. 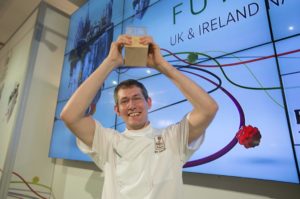 Elaine Thomson, Course director at LSBU’s School of Bakery said, “We’re so thrilled with Barry for representing LSBU and making us proud by winning the World Chocolate Masters in style. He gave such an assured and confident performance under pressure and it’s great to see that the judges have recognised his creativity as a master chocolatier.”

Gary Hunter, President of the Jury said: “Barry maintained a consistently high standard throughout the competition, showing great analysis of the ‘futropolis’ concept he captured the imagination of all of the judges.”

Robert Harrison, Cacao Barry Sales Director for Northern Europe added: “It was a fantastic competition with incredibly high standards and immense personal challenges, Barry emerged a worthy winner and we look forward to his presence at the final of WCM next year.”