By Newsroom on July 25, 2016Comments Off on M&M’s Name Coffee Nut as Winner in First Ever “Flavor Vote” Campaign

In honour of the brand’s 75th anniversary, M&M’s asked fans to choose the brand’s newest peanut-flavoured addition to join Original Peanut on shelves. With more than one million votes cast, M&M’s is proud to announce Coffee Nut as the flavour loved most! 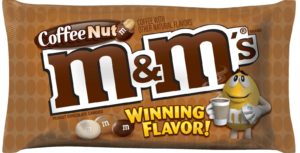 “We are so thrilled that our fans helped to shape our brand’s vibrant future,” said Tanya Berman, Director, M&M’s Brand. “Flavour Vote was the perfect campaign to show how much we value our fans’ opinion. The brand is looking forward to adding Coffee Nut to our peanut flavoured line up in August.”

Once fans cast their vote for their favourite new M&M’s Peanut flavour, they were entered for the chance to win $100,000 and earn the title of the official M&M’s Taste Tester. 2016’s official winner is Jason Y. from Raleigh, NC!

M&M’s Name Coffee Nut as Winner in First Ever “Flavor Vote” Campaign added by Newsroom on July 25, 2016
View all posts by Newsroom →