By Newsroom on August 12, 2014Comments Off on M&M’s World Celebrates Grand Opening in Shanghai 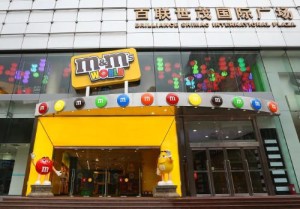 M&M’s, the world’s biggest chocolate brand, celebrated the grand opening of its first M&M’S World store in Asia – M&M’s World Shanghai – on vibrant East Nanjing Road. Creating 130 new jobs, the 1,600-square-meter  ‘retail-tainment’ destination is the first in Asia – showcasing the strong growth of the M&M’s brand in China and throughout Asia.

“We are thrilled to add M&M’s World Shanghai store to our global store foot print. Shanghai is the ideal city for the first M&M’s World store in Asia, due to the city’s truly global feel and appeal,” said Brian Schiegg, General Manager, Mars Retail Group. “The location in the Brilliance Shimao International Plaza made perfect sense for the world’s largest chocolate brand, since East Nanjing Road is one of the busiest pedestrian streets in China and a highly visited tourist destination in Shanghai. M&M’s World Shanghai welcomes visitors to a unique retail experience that combines shopping and entertainment, with an eye-catching, iconic-looking store that engages and excites fans of the M&M’s brand from all over the world,” he said.

The store combines iconic Chinese landmarks and cultural elements with M&M’s in a colorful and fun way, making it a new “must-see” destination in Shanghai for both domestic and international visitors. Visitors to the store will be greeted by popular Red and Yellow M&M’s characters standing outside the main entryway, or Kung Fu Characters – Blue and Green dressed in kung fu clothing at the store’s side entrance within the mall. 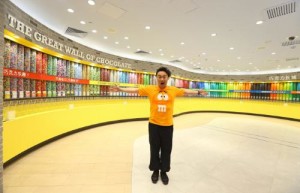 Yellow Panda in the Bamboo Garden features Yellow disguised as China’s national treasure amidst bamboo stalks aglow in vibrant M&M’s colors and a lantern lit by a red M&M’s lentil. As guests walk up the stairs to the second floor, they are greeted by a large Moon Gate that previews the Great Wall of Chocolate. Large, colorful Character Columns depicting the M&M’s characters and their signature catchphrases are also seen throughout the store. Daily performances by M&M’s characters allow visitors to engage with the life-sized characters in person.

Brand Chocolate Candies from 132 individual tubes.  Standing guard at either side of the Great Wall of Chocolate are Red and Orange dressed as Warriors.  In addition, the Lantern Garden features numerous hanging lanterns that illuminate and change colors as visitors step on the platform.

“The opening of M&M’s World Shanghai, a partnership between the M&M’s brand and Mars Retail Group, represents a significant investment and commitment to the Chinese market by Mars, Incorporated. We look forward to celebrating the world’s most popular confectionery brand in China in a new engaging way that is guaranteed to make M&M’s World Shanghai one of the city’s sweetest attractions,” said Clarence Mak, President, Mars Chocolate China.

In keeping with Mars’ commitment to sustainability and consumers’ growing interest in the subject, M&M’s World Shanghai uses sustainable materials and energy efficient fixtures and lighting.