By Newsroom on March 30, 2015Comments Off on Mountain Dew Reintroduces Iconic “Do the DEW” Credo with New Global Creative

Duct tape, matches, a skateboard and a bottle of DEW at first glance are ambiguous on their own. However, when DEW Nation takes a second look, they see opportunities where others don’t to instigate an extraordinary, exhilarating, damn good time.

To illustrate this unique attribute of Mountain Dew fans everywhere, the one-of-a-kind citrus beverage is introducing “Do the DEW,” the iconic rallying cry and brand credo, as the anchor of its first-ever global brand campaign, uniting DEW Nation around the world.

“Do the DEW is more than just an advertising slogan for Mountain Dew – it represents the attitude of a community that really seeks to live life authentically,” said Simon Lowden, Chief Marketing Officer, Pepsi Beverages North America. “True to what DEW Nation has come to expect from DEW, we created the content for this global campaign with authenticity as our filter, and we can’t wait for our fans to have a damn good time with it.”

The global “Do the DEW” campaign features two creative films – for traditional and digital viewing and sharing – where ordinary “ingredients” paired with a bottle of DEW create the perfect recipe for a damn good time. “Fireboard” – starring professional skateboarder Sean Malto – sparks a beach bonfire with a trick and twist. “Directions” follows Olympic snowboarder Scotty Lago and his birdseed trail from the snowy caps of Canada to a lively mountain base bash.

“Mountain Dew is one of our billion dollar brands and one of our fastest growing global brands. It enjoys unparalleled leadership positions in countries like Pakistan and India, as well as the United States, and is one of the few brands – in beverages and throughout the consumer goods space – that has no real competition. It is truly a category of one,” said Brad Jakeman, President, PepsiCo Global Beverages Group. 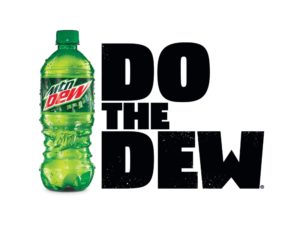 “Harmonizing Mountain Dew under the first global integrated marketing campaign is part of our commitment to reinvest in our top brands, and leveraging its scale and muscle will allow us to continue to build this powerhouse brand with the same passion and authenticity that the DEW Nation has come to expect of Mountain Dew.”

To bring “Do the DEW” to life in an epic way across the globe, Mountain Dew partnered with one of Hollywood’s hottest directors, Justin Lin, known for his work directing The Fast & The Furious franchise and the upcoming season of HBO’s True Detective and the highly anticipated Star Trek 3.

“It was a thrill to collaborate with Mountain Dew and our collective of filmmakers in order to capture what it means to ‘Do the DEW,'” said Lin. “We really embodied that meaning in the making of this content – pushing the limits of creativity and hopefully capturing its essence for fans around the world.”

The integrated global “Do the DEW” campaign also includes a refreshed visual identity system with impactful print and out of home, as well as sharable digital content. DEW Nation can check out the work by following Mountain Dew on Facebook, Twitter and Instagram in their local country and join the conversation using hashtag #DoTheDew.

Globally, Mountain Dew accounts for two of PepsiCo’s 22 billion dollar brands with Mountain Dew and Diet Mountain Dew each generating more than a billion dollars in estimated annual retail sales in their own right. In the United States, Mountain Dew is a powerhouse brand that has been recognized by Beverage Digest at the #3 liquid refreshment beverage megabrand and it is the No 1. flavored carbonated soft drink.

Mountain Dew Reintroduces Iconic “Do the DEW” Credo with New Global Creative added by Newsroom on March 30, 2015
View all posts by Newsroom →