The on-site experience will debut at the Burton US Open of Snowboarding in Vail, Colorado and South by Southwest in Austin, Texas.

With a “first-of-its kind” interactive feature called “Time Warp,” users can press a button during the experience to jump backwards and see an action sequence all over again.

Christine Ngo, digital brand manager of Mountain Dew, told The Drum: “We really love our fans so we’re always trying to find more ways to bring them closer to experiences that they love. Mountain Dew fans tend to love skateboarding, snowboarding, and action sports in general. As a brand, we see ourselves as digital instigators.” 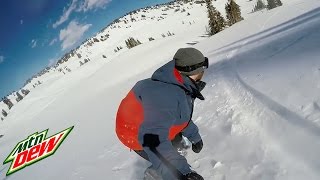 The experience was created with the help of digital agency Firstborn. Head of production at Firstborn Will Russell said the agency partnered with entertainment and production company Brain Farm to make the actual product.

“We brought our virtual reality expertise to the table, and we created something really, really cool,” he told The Drum.

For those who cannot try out the Oculus Rift on-site, the Dew VR Snow content will also be available on the Samsung Milk VR Marketplace, where consumers can view the content wearing a Samsung Gear VR headset.

Last year, the brand released a VR skateboarding experience at the Dew Tour in Brooklyn.