By Newsroom on July 4, 2016Comments Off on Nestlé to Dial up Spotify Presence to Capitalise on People’s Mindsets 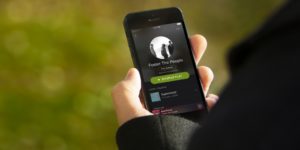 Nestlé is in talks with Spotify to see how it can take advantage of the music streaming site’s highly engaged user base and is exploring the potential of creating branded playlists to reach listeners who spend on average two hours a day on the platform.

With close to 100 million users globally and a total of 17 billion hours of music streamed in 2015, Spotify is a veritable beast of a platform, and one that Nestlé’s global head of digital and social media told The Drum could be “gold” to its marketing if the company can figure how to get its brands in front of Spotify’s user base.

“Spotify’s listeners are there two hours a day and a surprising amount are active so it’s not just people there passively. They are manipulating and sharing their lists. I’m not even sure they [Spotify] know what they are sat on. The music stuff really gets to the heart of consumer emotion and if you think about how music can bring back an old emotion or memory there is gold there if we can really figure it out.

“That is the platform where if you interview me next year I probably won’t say that we wrote huge checks, but we made a lot of progress… when there is two hours of consumer activity a day we’d better figure that one out.”

While too early to say exactly what a Nestlé/Spotify advertising partnership might look like, Blackshaw said he could see playlists created around activities that surround its brands such as cooking or drinking coffee, with a KitKat Break one example of a potential idea.

The maker of Nescafé and Cheerios is also betting on Facebook Live, which Blackshaw said presents Nestlé with the opportunity to connect people with its offline activity such as its sponsorship of events like the Tour de France or London Marathon.

“How do you take Live and use that as an extension of existing brand investments especially sponsorships? We are very early in that but we know it’s popular. It’s thrilling to get a live interaction even it is a small group. Smart brands will carve out their territory in the live streaming area and that is something we are encouraging nestle brand builders to do.”

Nestlé to Dial up Spotify Presence to Capitalise on People’s Mindsets added by Newsroom on July 4, 2016
View all posts by Newsroom →