By Newsroom on February 16, 2018Comments Off on New Coca-Cola Ad Features Adorable Mural Characters Thirsty for its Cold Bottles

During the Winter 2018 Olympics in South Korea, Coca-Cola will be running an adorable, mixed-media tale reminding viewers that in other parts of the world, where temperatures aren’t so frigid, an ice cold Coke can help beat the heat. 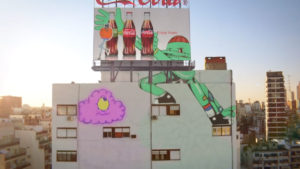 A new ad from Wieden & Kennedy depicts sweaty denizens in a concrete jungle, who guzzle down bottles of Coca-Cola as the sweat trickles down their brows.

All that thirst-quenching inspires jealous looks from cute, colourful characters who adorn the city’s grey facades–until they eye a trio of Coke bottles that appear in a billboard across the way.

The painted creatures escape their respective walls, leaping across town via buildings and cars, all the way to the bottles, which they ultimately raise in a joyous toast.

The beverage giant will also be re-running its diversity-themed Super Bowl spot during the games.