By Newsroom on September 23, 2016Comments Off on New Edition of World Chocolate Masters Dives into the Future of Chocolate 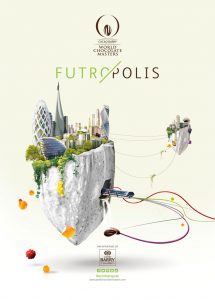 The World Chocolate Masters, hailed as the ‘most challenging and inspiring chocolate competition’ in the world of gastronomy, and the most prestigious title to win for chocolate chefs, is about to kick off its 2017/18 competition with the national pre-selections.

For the next two years, the competition will take its contestants and its global base of chocolate fans into the future with its newly revealed theme ‘Futropolis’. In a series of live events held simultaneously in 20 participating countries, this year’s theme was revealed in the company of the world’s most influential pastry and chocolate chefs.

For the UK and Ireland, the event was attended by former participants Ruth Hinks and Alistair Birt who offered their personal visions about the competition.

This year’s theme, ‘Futropolis’, is based on the growing phenomenon of megacities. By 2025, more than half of the world’s population is expected to be living in cities with 10 million inhabitants and more. These megacities will challenge our ways of living, working… and eating. How will chocolate ‘haute patisserie’ and culinary desserts look and taste? On what sensory adventures will chefs take us? These questions will be answered throughout the World Chocolate Masters competition.

“Plants will be grown underground and on city rooftops”, according to Ramon Morató – Global Creative Director Cacao Barry and member of the World Chocolate Masters Committee.

“Gastronomy will partner with science and technology to create new multi-sensory sensations. Chefs will look to designers, engineers and scientists to create new food shapes, edible packaging and reduce food waste. Consumers’ moods and well-being will be at the centre of food creation”, he continues. “We want to see how chocolate chefs in this competition come up with ideas and a vision for these challenges. Their creativity in all these fields will yield an entirely new basket of shapes and flavours for chocolate.”

Pushing the boundaries in chocolate creativity

Creative visions of the future of chocolate gastronomy is at the heart of ‘Futropolis’. The theme must be the starting point for all contestants to express their creativity. The World Chocolate Masters and Cacao Barry – the supporting premium chocolate brand behind the competition – want to lift it beyond the classic conventions of a culinary competition.

“The World Chocolate Masters has always been the platform where new talents showcase how they push the boundaries of chocolate. What chefs have created there has often been a preview of a new trend that was later seen on the high street. We’re really looking forward to seeing the new take on chocolate by young, millennial chefs and their ideas of flavour creation, combining it with savory elements, plants, locally grown ingredients, etc.”, Joost Lindeman – Global Brand Manager for Cacao Barry – explains.

A theme by chefs for chefs

Today, the new theme was revealed in each of the 20 participating countries through a series of live events held in locations that refer to the spirit of Futropolis. Influential pastry and chocolate chefs attended the event and support the participation of young talent in the competition. “The World Chocolate Masters is a prestigious competition that highlights our expertise as chocolatiers. The fact that we will work with the theme of Futropolis will allow us to examine the future of our own careers”, says Alistair Birt.

The contestants will have one day to create a chocolate showpiece called ‘Citizens of Futropolis’, a hybrid pastry reflecting ‘the flavours of Futropolis’, and a chocolate snack to go. In each of the assignments, the contestants have to integrate the theme: in the shape, design and presentation – and even more in the selection of ingredients they will use. Their creations will be evaluated by a professional jury of independent chefs and chocolate experts.

“The World Chocolate Masters is much more than a culinary competition”, explains Ramon Morató.

“It is an incredible journey during which most contestants learn to push their own limitations. It’s their window to the global culinary world. For many of them, it is a fantastic opportunity to reach out to other chefs, learn from them, establish new contacts and develop their own creative thinking skills. Not to mention, it is a platform for them to transform their professional paths into international careers. If you look at some of the previous winners and finalists such as Frank Haasnoot, Davide Comaschi and Vincent Vallée… They’ve become the leading international pastry and chocolate chefs.”

Cacao Barry and the World Chocolate Masters will develop training and coaching programmes for all finalists. “Brand new for this edition, we will host creative boot camps for all finalists to prepare them for the final”, says WCM Project Manager Marta Juanola.

“We will take them to some special places where mentors and coaches will immerse them in experiences and help them stimulate their creative thinking and competitive spirit. What’s more, they’re welcome in our Chocolate Academy centres to train their skills, get creative and technical support, and perfect their ideas.”

New Edition of World Chocolate Masters Dives into the Future of Chocolate added by Newsroom on September 23, 2016
View all posts by Newsroom →