By Newsroom on March 22, 2013Comments Off on Newcastle Brown Ale Introduces ‘No Bollocks 2013’ Intergrated Campaign

At the heart of the ‘No Bollocks 2013’ campaign is a series of TV spots comprised entirely of still photo images intended to cut through the clutter of expensive, elaborate, overly produced advertisements typical of the beer category. 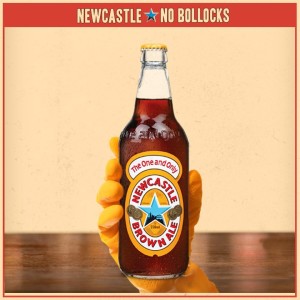 Instead of using the professional actors or beautiful models normally featured in beer ads, the spots feature ordinary people drinking at real parties having a real good time (or a real bad time in some cases).

The creative takes on traditional beer advertising gimmicks that imply that hand crafted workmanship and hand selected ingredients are unique to certain beers and that parties are made abundantly more fun with those same beers.

“While other beer brands may over-promise fame, fortune or glory, Newcastle Brown Ale offers the truth,” says Charles van Es, Brand Director, Newcastle Brown Ale. “Newcastle won’t make you more popular, better looking or the funniest person in the room – it can’t. It’s a beer. But it is a refreshingly delicious beer.”

The ‘No Bollocks 2013’ campaign, created by Droga5 New York, includes a series of TV and radio spots, digital, out of home and in-bar signage, posters, coasters and QR code tap handles rolling out throughout the year. All elements of the campaign offer a humorous and direct take on a category that is rife with bollocks.

The new marketing campaign coincides with the recent launch of a new 14.9 oz. Newcastle can, now available nationwide in 10-packs.

Just in time for spring and summer, Newcastle Brown Ale’s new cans contain the same recipe first brewed in 1927, offering a smooth taste with its distinct golden brown color and lightly hopped taste, with an alcohol by volume (ABV) of 4.7 percent with 18 International Bittering Units (IBUs).

Van Es said, “We’re excited to introduce our new can because that means that more people across the country will get to enjoy refreshing Newcastle Brown Ale in places that don’t allow bottles. In other words, it will be good for business.”