By Newsroom on September 19, 2016Comments Off on Now Launches ‘Speak Cheesy’ Campaign For New York Bakery

The New York Bakery (NYB) company is launching a new Cheese Bagel, with a multi-media campaign created by Now.

“Research told us that the bagel flavour most Britons wanted to try – by a long way – is cheese.” said NYB Marketing Director, Tim Barkey. 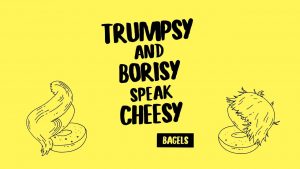 The campaign idea is to create a new language playing off the word cheesy – #SpeakCheesy. The media includes press, content, OOH, social media, and display. One of the pre-roll executions is a phone conversation between two characters called ‘Borisy’ and ‘Trumpsy’ speaking to each other across the Pond in the cheesy language; performed by impressionists John Culshaw and Lewis Macleod.

The full campaign launches on September 19, and runs nationally in the UK.

Now’s ECD Remco Graham said: “New York Bakery is a great brand to work on, and the brief for Cheesy Bagels was a gift to come up with standout work.”