By Newsroom on May 16, 2016Comments Off on NPH Returns to Heineken Light’s “Best Tasting Light Beer” Campaign

Heineken Light, Gold medal winner at the 2015 European Beer Star Awards and “Best Tasting Low Calorie Lager” winner at the 2013 and 2014 World Beer Championships, announced the evolution of its “Best Tasting Light” campaign for 2016. Reprising his role as spokesperson is award-winning actor, Neil Patrick Harris, who uses his trademark wit and humour to challenge authority in the new TV commercials and digital spots, produced in 2016 by Publicis Worldwide.

The new Heineken Light creative will feature a series of two TV commercials and four digital videos starring Neil Patrick Harris, who finds himself in conspicuous situations with of a variety of authoritative figures, from lawyers to police men. Despite their banter, none can deny that Heineken Light is ultimately the “Best Tasting Light Beer.”

“I couldn’t be more excited to continue working with Heineken Light and bring this project to life in a fresh, hoppy new way,” said Neil Patrick Harris, on his role as Heineken Light spokesperson for the third consecutive year. “Awards have proven that Heineken Light is a great tasting light beer, and I can’t wait to see how people react to this year’s campaign of refined beverage hilarity.”

In late 2015, Heineken Light received a Gold medal in the ‘German-style Leichtbier’ category at the European Beer Star awards; considered the Champions League of the international brewery world. The 115 expert-member jury – made up of master brewers, beer sommeliers and recognized beer experts from 27 countries – conducted a two-day blind taste test where they evaluated nearly 2,000 beers from 45 countries and only awarded one gold, one silver and one bronze in the 55 categories. 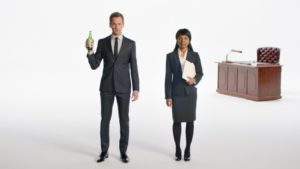 Winners were evaluated based on criteria that consumers also use to judge a beer – optical impression, foam, aroma, taste and brand-specific characteristics. Traditionally used in more full-bodied IPA’s, Heineken Light is one of the only light lagers uniquely brewed with cascade hops, allowing consumers to enjoy a light beer with a more complex, award-winning taste.

“At Heineken, we believe that you don’t need to sacrifice great taste when drinking a light beer,” said Ralph Rijks, Senior Vice President, Heineken. “As one of the few Light lagers to use cascade hops, our beer’s clean finish and low calorie count, 99 calories per bottle, paired with Neil Patrick Harris’ unmatched humour set us up for great success in the year to come.”

Along with an updated, cleaner packaging design, (including a new white and silver can which will be seen in the digital spots premiering this summer) the launch will be supported through a mix of traditional and paid media, digital, PR, and experiential marketing. The brand will also carry out sampling opportunities where legal with adults 21+.

NPH Returns to Heineken Light’s “Best Tasting Light Beer” Campaign added by Newsroom on May 16, 2016
View all posts by Newsroom →