By Newsroom on March 9, 2018Comments Off on Nutella Spreads a Little Love in February with Guinness World Record

Nutella ended February, ‘The Month of Love’, with the achievement of a Guinness World Record for the longest line of pancakes, held at Sydney University.

The culmination of a month long digital campaign titled ‘Spread A Little Love’ via The Kinetic Agency, where users were encouraged to share personalised messages of love. Each shared message equated to a few centimetres of pancake building towards a collective goal of over 50m. 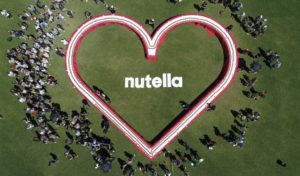 The Kinetic Agency worked with Nutella and its partners to conceive and activate the campaign. Targeted bursts of social activity across Pancake Day and Valentine’s Day resulted in the number of shares equating to 110.85m of pancakes. This set the final target for the world record attempt to be held on last day of February during O week.

Nutella’s senior brand manager, Gina Yuwana was there to witness the Guinness adjudicator measuring and counting down the final pancakes, as a live feed to Studio Ten aired the moment the record was broken. She said: “We are very happy with the result. This is a real moment in history that we’re making here.”

Tamara Tirzah Kahn, creative director, Kinetic added: “We wanted to inspire Nutella’s loyal fans to engage with the brand in a meaningful way. Our social feeds are constantly under the spotlight for the kind of content we see and its effect on us. Receiving love, sharing love and being part of the Nutella “Spread a little love” campaign has a higher and more meaningful purpose for Australians today.”

Nutella Spreads a Little Love in February with Guinness World Record added by Newsroom on March 9, 2018
View all posts by Newsroom →