By Newsroom on April 17, 2018Comments Off on Man Goes to Ridiculous Lengths to Share a Burger King with His Daughter in New Ad

A bearded man in frilly trainers, sequined top, a pink satin jacket and ponytails isn’t something you’d expect to walk down your school corridor. But in Burger King‘s latest spot ‘The Little Girl’ that is exactly what one dad does to ensure his daughter gets the best grades. 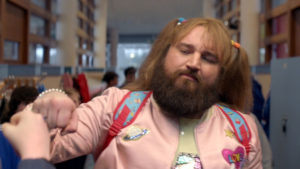 The spot created by Buzzman, sees the man dresses as his daughter walk into his daughters class to take her class test.

The creative shows the shock and surprise on the young students faces as the grown man high fives and fist pumps them before ‘mic dropping’ the pencil at the end of the quiz.

The dad leaves the class to meet his daughter who is anxiously awaiting him in the car dressed in the exact same outfit, hairstyle and all. 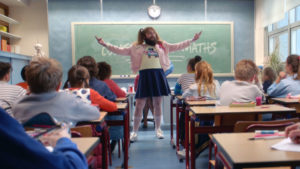 It is then revealed in a flashback that the mum and wife of the family has promised the girl a trip to the fast food chain with her dad if she performs well in the quiz.

Produced to promo the Burger King France Kool King menu that appeals to 8-12-year-olds. The film, directed by Vincent Lobelle, is set to air on TV with 20-second and 30-second formats.

Man Goes to Ridiculous Lengths to Share a Burger King with His Daughter in New Ad added by Newsroom on April 17, 2018
View all posts by Newsroom →