By Newsroom on July 18, 2017Comments Off on Patrón Teams with Guillermo del Toro for New Limited-Edition Tequila 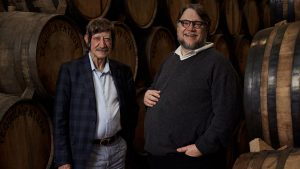 This partnership marks one of the first collaborations in which del Toro has engaged outside of the entertainment industry, and among a handful of partnerships carefully selected by Patrón over its long history.

The drawings on the packaging were inspired by jimadores, the skilled labourers in Mexico who for generations have hand-harvested and trimmed the Weber Blue Agave that creates tequila centrepiece glass bottle.

Only a very limited number of sets of Patrón x Guillermo del Toro were produced, and are currently available at fine spirits and liquor retailers across the US for the suggested retail price of $399.

Patrón Teams with Guillermo del Toro for New Limited-Edition Tequila added by Newsroom on July 18, 2017
View all posts by Newsroom →