By Newsroom on December 8, 2015Comments Off on Patrón Tequila Takes Over Display at Selfridges in a Christmas Sales Drive 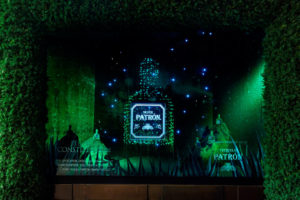 Patrón Tequila, one of the most-recognised and respected luxury spirits brands in the world, has taken-over a Christmas window display in Selfridges as part of its UK Christmas sales drive. The activity has been produced and created by launch specialist agency Five by Five.

‘A Perfect Constellation’ is a constellation of stars in the shape of the iconic Patrón bottle. It uses 1000 programmed custom produced sparkling green lightbulbs positioned on a free-hanging lightbulbs structure to give the impression of a constantly moving and twinkling formation of stars. Patrón will also be running sampling activity, produced by Five by Five, on Selfridges’ sales floor as well as four of the top Patrón selling Waitrose stores across the country. 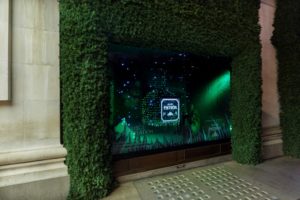 Selfridge’s Christmas theme this year is constellations and the ‘Perfect Constellation’ takes this and makes it uniquely Patrón.

Matthew Sykes, Director of Marketing (EMEA), Patrón Spirits International, comments: “We are proud to be partnering again with such a prestigious institution like Selfridges, whose windows are admired worldwide. The installation reflects Patrón’s commitment to perfection and celebrates our iconic bottle. From our time-honoured and traditional production process, to the individual labeling, inspecting, and numbering of each bottle, Patrón has truly perfected the art of making tequila.” 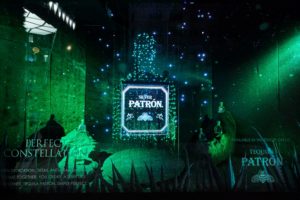 Martin Flavin, Creative Director at Five by Five, said: “Patrón and Selfridges are a match made in heaven. They both represent uncompromising quality and luxury. Perfect Constellation is our way of bringing these two iconic brands in the most magical, Christmassy way possible. Over the past six months we’ve worked with Patrón, the number one ultra-premium tequila in the UK. We’re talking to mixologists, bartenders and high-end consumers about the craft, quality and perfectionism that goes into creating this gorgeous spirit range.”

Patrón Tequila Takes Over Display at Selfridges in a Christmas Sales Drive added by Newsroom on December 8, 2015
View all posts by Newsroom →