2017’s bottle – the 6th consecutive limited edition St Patrick’s Day bottle – is inspired by the Jameson family motto Sine Metu – or, ‘without fear’ – which has been at the heart of the company since it was founded in 1780 and goes hand in hand with the commonly used saying Irish saying ‘to chance your arm’.

The new design is inspired by the legend that in 1492, ‘Black James’ Butler and his men found themselves barricaded behind the door to St. Patrick’s Cathedral in Dublin. On the other side was Gearóid Fitzgerald who, tired of the constant fighting between the clans, decided it was time to make peace. Fitzgerald ordered his men to cut a hole in the door before extending his hand through the gap as a token of friendship.

Rather than cut his arm off with a sword, Butler shook it and the long standing feud came to an end, giving Dublin one of its most famous sayings: to chance your arm. Over 500 years later, Dublin is still a place where social barriers break easily and friendships come about in the most unexpected of ways.

Jon Vallance, Pearlfisher Design Director says, “The annual unveiling of the Jameson limited edition St Patrick’s Day bottle design has become highly anticipated around the world. Year on year, the calibre of its collaborating artists and the eclectic and inspirational portfolio they are building for Jameson uncovers something more about the brand and challenges perceptions about what it has to offer. Each individual design builds excitement for the celebrations by bringing to life a particular association with Dublin or by inspiring a mood – and this year is no different. 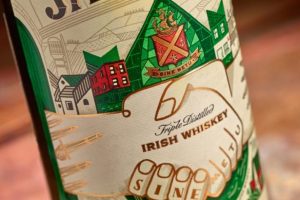 Steve McCarthy is known for his bold, colourful and witty style and his work is often inspired by the playful use of words that the Irish are famous for. Here, against a backdrop of Dublin’s most recognisable monuments, the ‘chance your arm’ story is depicted in a handshake framed by the St Patrick’s door of reconciliation. The words ‘Sine Metu’ are tattooed on the knuckles of each hand, as a reminder that when we fear a bit less, we live a bit more.”

Steve McCarthy said, “I wanted it to feel like there was a deeper meaning to what you see. For me, the Jameson motto is very emotive and I hope that with my design I am able to speak to others around the world who have also been inspired by Sine Metu, or those who might still with this release, to fear a bit less to live a bit more.” 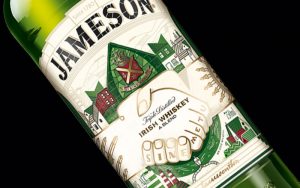 Daniel Lundberg, Jameson Global Brand Director said, “Our limited edition Jameson bottle for 2017 keeps the spirit of John Jameson alive and celebrates a very Irish saying that dates back to the 15th century but is as relevant as ever today. As Jameson found when he established the Bow Street distillery in 1780, fearing less can help you reap rewards you never thought possible and we still proudly live by this ethos. The design perfectly balances the rich heritage of Dublin with the modern design and Irish wit of Jameson, and we hope that Irish whiskey fans will be inspired by the bottle in their own St. Patrick’s Day celebrations.”