By Newsroom on January 17, 2014Comments Off on Pepsi Gives Selected Guests of Theatres the Chance to ‘Sip Like a Star’

As an official sponsor of the 2014 Academy Awards, Pepsi announced it is giving guests of selected Regal Hollywood Theatres the exclusive chance to “Sip Like a Star” and be part of Hollywood’s biggest night.

Running from Friday, Jan. 17 through Friday, Feb. 14, moviegoers can purchase any Pepsi fountain beverage, including Diet Pepsi, Mountain Dew and Sierra Mist, at one of Regal’s participating Hollywood Theatres and text the word “Movies” to the number on the cup sleeve for the chance to win amazing prizes.

The top prize will send one lucky winner and their guest to Los Angeles for a once-in-a-lifetime Oscars’ experience that first includes Red Carpet seating during the arrivals and then two tickets to InStyle’s Viewing Party.

Roundtrip airfare, car service, a three-night stay in a luxury hotel and spending money to purchase a new outfit are also included. Other prizes include a Regal Cinemas gift card, free popcorn or Pepsi fountain drink at any participating Regal Hollywood Theatre. Full contest rules, details and a list of participating theatres can be found at www.PepsiSipLikeAStar.com. 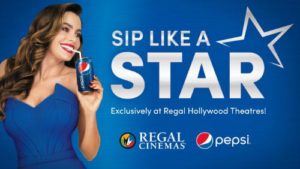 “Pepsi is always on the pulse of pop culture and entertainment, bringing consumers unique experiences to be part of the action,” said PepsiCo Foodservice Chief Marketing Officer Roberto Rios. “We’re excited to partner with selected Regal Hollywood Theatres on the ‘Sip Like a Star’ campaign to bring together their guests’ passion for movies and Pepsi’s special access to the Oscars.”

“We love Oscar season as much as our customers do and can’t wait to give them the chance to win great prizes through Pepsi’s ‘Sip Like a Star’ contest,” said Regal Entertainment Group Chief Purchasing Officer Robert J. Del Moro.

“Just in time to celebrate this year’s Academy Award nominees, this promotion is exclusive to participating Regal Hollywood Theatres’ guests. This is a fun, easy way for our moviegoers to get in the spirit of the Oscars.”

Academy Awards for outstanding film achievements of 2013 will be presented on Oscar Sunday, March 2, 2014, at the Dolby Theatre at Hollywood & Highland Center and televised live on the ABC Television Network.

Pepsi Gives Selected Guests of Theatres the Chance to ‘Sip Like a Star’ added by Newsroom on January 17, 2014
View all posts by Newsroom →