By Newsroom on October 6, 2015Comments Off on Pepsi Rolls Out Limited Edition ‘Pepsi Perfect’ As Seen In ‘Back To The Future’

Fans of the Back to the Future series can now enjoy ‘Pepsi Perfect’, as seen in the second movie of the trilogy, where Marty Mcfly purchased it at the Cafe ’80s when he traveled to 2015.

In celebration of the film’s 30th anniversary, Pepsi will be producing 6,500 bottles of these limited edition Pepsi Perfect, which will be sold online at a price of US$20.15, unlike the bottle that Marty purchased for US$50. 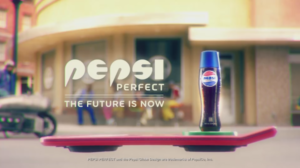 The bottle is shaped like the one seen in the film, along with the same logo design printed on it. The drink will feature the formula found in ‘Pepsi Made with Real Sugar’.

“Pepsi fans asked and we heard them loud and clear,” said Lou Arbetter, Senior Director of Marketing, PepsiCo. “The Back to the Future trilogy was as big a moment in pop culture history then as it is now, 30 years later. We are excited to be part of this moment and to bring fans something only Pepsi could deliver – and there’s no need to wait – the future is now!”

The drink will be available for purchase on 21 October 2015, on the same date that Marty arrived in the future, which coincides with a special edition re-release of the entire Back to the Future series.

Pepsi will also be hosting a Back to the Future-themed panel discussion at New York Comic Con, along with a booth designed to look like Cafe ’80s, where Pepsi Perfect will be given out free to event goers who dress up like Marty.

Pepsi Rolls Out Limited Edition ‘Pepsi Perfect’ As Seen In ‘Back To The Future’ added by Newsroom on October 6, 2015
View all posts by Newsroom →