By Newsroom on October 24, 2013Comments Off on Pernod Ricard Launches eCommerce Hub to Fuel UK Sales

Pernod Ricard has launched its first ecommerce hub in the UK to capitalise on returning customer spend across the region, a move that follows similar recent announcements from rivals Diageo and AB InBev. 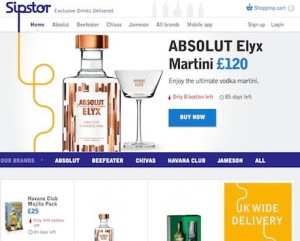 The Sipstor, dubbed an online “drinks boutique” by the company, sells variants from key brands Absolut, Jameson, Havana Club, Malibu, Beefeater London, Chivas and Pernod Absinthe. It is supported by a companion app that lets consumers keep up-to-date with the latest offers and purchase exclusive products not available on the site.

The drinks maker has been hinting at a move into the online retail space for the past 12 months, testing how it drives sales at point-of-purchase through targeted promotions.

It follows a similar move by Diageo earlier this year, which saw it launch its first online store selling premium brands such as Johnnie Walker Blue Label, Ciroc Ultra Premium Vodka and selected single malts. AB InBev, which is also moving into the space, predicts direct selling will be a key battleground for the alcohol industry’s push for deeper shopper insight and new revenue streams.

Pernod Ricard is hoping the portal accelerates sales across the region over the festive period after citing its “very good performance” in its latest quarter. The market’s improved summer sales and increased footfall in pubs and clubs helped lift Western Europe revenues 2 per cent year-on-year for the three months to 30 September. Globally, like-for-like sales slumped 1 per cent year-on-year in the period and 5 per cent down on the previous quarter. Its growth was impacted by the slowdown in emerging markets that also hampered rival Diageo’s performance over a similar period.

Pierre Pringuet, chief executive of Pernod Ricard, says it remains confident the “diversity” of its brands alongside the “strength” of its distribution network” will allow it fuel growth moving forward. The company highlighted the campaign for Absolut’s recently revamped flavoured vodkas and a revamp of its Imperial whisky brand as key initiatives to help spur growth over the next quarter.