By Newsroom on February 18, 2016Comments Off on Pernod Ricard to Show Wine isn’t ‘Fussy’ with ‘Simple’ Jacob’s Creek Brand 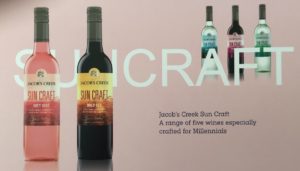 Pernod Ricard thinks millennials see wine as “too fussy” and so has concocted a Jacob’s Creek sub-brand especially for them so that it can recruit new drinkers to the low-growth category.

The drinks brand sees Jacob’s Creek Sun Craft as a chance to offer younger drinkers “quality without the confusion” as it looks to maintain growth amid intensifying competition craft beers, cider and cocktails. Millennials are more adventurous in their tastes for alcohol but Pernod Ricard’s managing director for its UK business Denis O’Flynn believes the category needs “simpler messaging” to exploit that shift.

It’s why Sun Craft will be marketed with simpler messaging compared to other brands, with the packaging featuring no mention whatsoever of the grape variety as is custom for most wines. The wines instead will be labelled by the taste profiles, so one version is called ‘Crisp White’, for example.

However, each of the wines has a specific grape variety that will be part of how the launch campaign in April recounts the stories behind them, so that drinkers feel as if they are discovering the wine rather than being bombarded with lots of information about its provenance – a move in line with the brand’s positioning as an entry level alternative. Pernod Ricard hopes that those who like the brand will trade to Jacob’s Creek’s classic and reserve ranges. 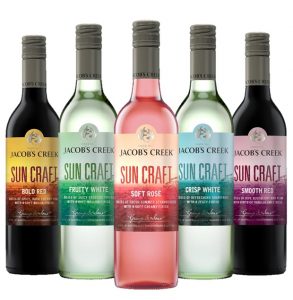 “This is about making the start of the wine journey simple and then if you like ‘product A’ therefore you will like ‘product B’,” explained O’Flynn at an event hosted by the company on February 16. “It’s very different in its design and we’ve tried to make the messaging easer to remember and easier to recall.”

The wine will come in five variants – two red, two white and a rosé – and will go on sale in the off-trade initially before a potential rollout across pubs and clubs.

Despite the relatively flat growth (0.3 per cent) in the first half of its financial year, Jacobs Creek’s value sales in the off-trade rose 16 per cent in the 28 weeks to December, according to Nielsen Scantrack figures cited by the drinks business. The business will be hoping the addition of Sun Craft can keep up that momentum going into the second half of its financial year.

Pernod Ricard’s push for new consumers in the UK comes as the business remains wary of its place within a rapidly changing grocery market. Supermarkets are rationalising their stock levels in an attempt to curb costs, though the company’s premium offering has meant that it has not been affected by the changes yet.