By Newsroom on December 1, 2016Comments Off on Perspective: Branding Totally Cheeses Up Cheez Doodles’ New Packaging 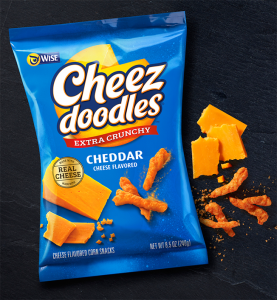 Americans spent about $1.4 billion on cheese snacks in 2016, and few brands know that better than Wise. The snack giant has been making Cheez Doodles since the early 1950s—extruding them at a rate of 220 doodles a second at its plant in Berwick, Pa., Wise turns out an estimated 15 million pounds of Cheez Doodles every year.

But even with a steady demand for puffs, Wise can’t take its market share for granted with Pirate’s Booty, Frito-Lay’s Cheetos and Utz’s Cheese Curls all competing in the space. It’s why, after years of merely puffing along, Wise is rolling out a revamped Cheez Doodles, featuring three new flavours and dramatically updated packaging.

“We do have a lot of loyal customers, but the brand was due for a refresh,” said Wise Foods CMO Jeremy Bjork.

A veteran from competitor Frito-Lay, Bjork joined Wise about 18 months ago. One of the first things he noticed, he said, was that Cheez Doodles had the potential to be more than just another snack offering from Wise—it could be a brand that could stand on its own. But for that to happen, he said, “We needed to contemporize the product.”

Much of that contemporizing is on display right on the bag. Wise decided, logically enough, to use cheese as the thematic grounding for its new image.

“A name like Cheez Doodles is really simple and straightforward, and it emphasizes the cheese. We thought we could own that,” explained Simon Thorneycroft, CEO and founder of Perspective: Branding, the firm that redesigned the packaging. “We know it tastes good, but if we can emphasize the word cheese and build visual equity around cheese, that’s the heart of the brand promise.”

And how do you build visual equity around cheese? Let us count the ways.

Out went the yellow background oval behind the brand name to be replaced by a wheel of cheddar. The cheese puffs shown on the package are actual photos, and the name “Cheez” is much bigger now—so big, in fact, that it crowds the Wise logo into the upper left corner. Just for good measure, there’s also a wedge of cheese on the bag, with chunks of crumbled cheese falling off it.

“These are all cues to reinforce the cheesiness of the product,” Bjork said.

One contentious issue surrounding the redesign was the decision to feature cheese dust—you know, that orange stuff that gets on your fingers and everyplace else—on the bag itself. Thorneycroft concedes that cheese dust can be stomach-turning for some people, which is why “most brands like to hide it.” But for puff aficionados, “That stuff equals flavour,” he said. “So we put it on the package. We showed the dust.” 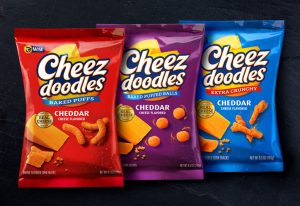 Meanwhile, Wise has rolled out three new flavours as part of the update: Cheez Doodles Extreme, an extra-spicy flavour with a touch of lemon; Cheez Doodles Queso Habanero; and Cheez Doodles Baseballs, a limited-time, white-cheddar puff co-branded with the New York Mets.

The new flavours, along with the new packaging, Bjork explained, are geared toward younger consumers. Thorneycroft added that it took guts for Wise to essentially scrap a recognizable bag and take the chance of staking its brand reputation on cheese alone. Even so, he pointed out, don’t people reach for cheese puffs because they like cheese? “It’s just about honesty,” he said. “It allows the cheese to be the brand.”