By Newsroom on January 3, 2014Comments Off on Pizza Hut Celebrates Online Anniversary with New Promotion

In recognition of the 20-year anniversary of a Pizza Hut pizza being the first physical good ever purchased over the internet, Pizza Hut will offer 50 percent off any medium or large pizza ordered online from Jan. 1-10. Before books, apparel or travel were ever bought online, or online specific retailers took to the internet, “PizzaNet” – Pizza Hut’s digital ordering hub – launched in 1994 and accepted the first-ever online order, a large pepperoni, mushroom and extra cheese pizza.

To kick off the Year 2014, the world’s largest pizza company will reward loyal online customers with its best ever online deal. Participants will also join the brand’s “Hut Lovers” program, which provides members with other exclusive deals. 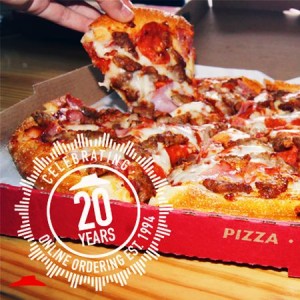 “We want to celebrate the fact that before consumers could buy books, clothes, music or vacation packages via the internet, they could place an online order for a Pizza Hut pizza,” said Carrie Walsh, chief marketing officer at Pizza Hut. “We’re doing so by giving back to our customers who have helped us lead the way with digital innovations over the last 20 years.”

Customers have enjoyed countless digital innovations from Pizza Hut since the first order was placed in 1994. The technology used to make online ordering a reality on PizzaNet evolved into a more current-generation web-ordering experience that launched for a handful of restaurants in 2001. That led the way for nationwide online ordering at PizzaHut.com in years to follow.

Today, PizzaHut.com is the foundation of the brand’s digital footprint and serves as the largest pizza restaurant in the world.

In 2003, customers could place orders up to a week in advance online, making planning for the big football game easier than ever. Pizza Hut began reaching consumers in a whole new way in 2007, becoming the first national pizza company to launch a Facebook page, where the brand now boasts more than 10 million fans.

As online sales began to pick up, to the tune of $1 billion dollars by 2008, Pizza Hut launched an award-winning, category-first ordering app for the iPhone in 2009. Customers and industry pundits lauded the sleek new app that allowed

users to swipe and build their own pies topping by topping. The popularity of the app led to similar versions for Android smartphones and the iPad, as well as a revamped mobile web ordering experience.  In 2013, Pizza Hut took it a step further with an ordering app for Xbox 360, fueling gamers across America with the first tangible good ever offered within the Xbox LIVE marketplace.

As a result of advancement across the plethora of Pizza Hut platforms, digital orders have increased 100 percent since 2009. Mobile ordering, the fastest growing division within digital at Pizza Hut, has grown by 4,000 percent in the last three years.  In 2013, Pizza Hut surpassed $6 billion in all-time digital sales.

“Our focus on digital, from 1994 to today and into the future, is about creatively engaging with our customers in ways that fit their evolving lifestyles,” said Rohit Kapoor, chief information officer at Pizza Hut.

“We knew we were on to something 20 years ago with PizzaNet, and we haven’t stopped innovating since the day that first order was placed. We feel 2014 will be a banner year for Pizza Hut on the digital front and we’re excited to kick it off with a big ‘thanks’ to our customers in the form of 50 percent off online orders.”

The advertising campaign celebrating the brand’s digital leadership and announcing the 50 percent off deal is led by a new commercial featuring none other than 90s pop group Ace of Base and their hit “The Sign.”