By Newsroom on May 17, 2017Comments Off on Pop-Tarts Unwraps Candy Fun with New Jolly Rancher Flavours

This summer, Pop-Tarts and Jolly Rancher are teaming up to debut the first-ever candy-inspired Pop-Tarts flavours, including Frosted Cherry, Frosted Green Apple and Frosted Watermelon.

“We know our fans love the variety of Pop-Tarts flavours they can get their hands on, and the classic fruity flavours are always among their favourites,” said Angela Gusse, director of marketing for Pop-Tarts. “We’re making the classics even better by mashing up some of the juiciest Jolly Rancher candy flavours with Pop-Tarts toaster pastries.” 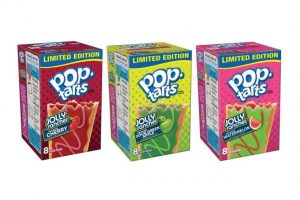 Pop-Tarts Unwraps Candy Fun with New Jolly Rancher Flavours added by Newsroom on May 17, 2017
View all posts by Newsroom →