By Newsroom on August 29, 2013Comments Off on Pot Noodle Facebook Post Banned for Being ‘Crass & Degrading’ to Women

Unilever-owned snack Pot Noodle has had a post on its Facebook page banned for being “crass and degrading” towards women.

The Advertising Standards Authority received two types of complaints about three Piri Piri Pot Noodles ads that appeared on the Pot Noodle Facebook page. It upheld one of the complaints for one of the ads, but did not uphold the other concerns.

The three ads, created by Mother London, took the form of one Facebook post, one video, and one online game, and one invited viewers to “peel the top off a hottie”.

The video ad shows a man eating a Pot Noodle on a bus. As he struggles with the spice, an attractive woman appears. The pair dance and flirt, but as the woman goes to remove her t-shirt, the man finds that he has finished his Pot Noodle.

The daydream abruptly ends, revealing that, in reality, the woman was a shabbily dressed man. The voiceover says: “Dreaming of something hotter? With Piri Piri Pot Noodle it’s easy to peel the top off a hottie.”

The online game and post followed on from the theme of the video. The game shows the woman and the shabbily dressed man standing next to Pot Noodle containers arranged to look like breasts, accompanied by the text: “peel the top off a hottie”. 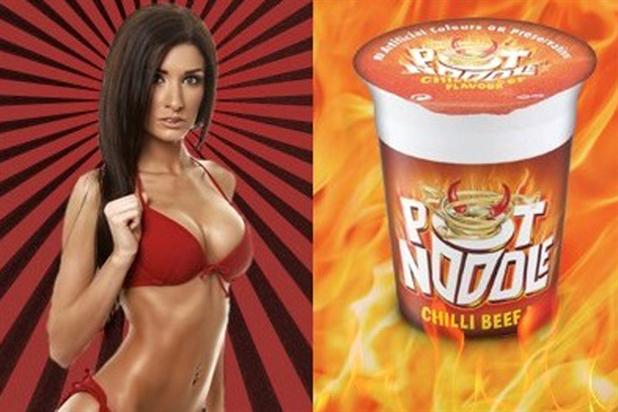 The Facebook post shows a female model in a bikini next to a picture of a Pot Noodle with the text: “Phwarr is it me or is it getting hot in here? HOT OFF. Which one gets you hotter?”

In response, Unilever argued that the ads followed Pot Noodle’s typical tongue-in-cheek style and rested on a “light hearted innuendo” based on the fact that a spicy product and an attractive woman could both be called a “hottie”.

Unilever stated that “hottie” is a word in common use and they believe that the word would not cause widespread offence.

Furthermore, Unilever emphasised the female character was “shown to be in control at all times rather than just a subject of male desire”.

The ASA upheld the complaint that the Facebook post was degrading to women. It stated that the “blunt comparison” between an image of a woman in her underwear posing provocatively and a food product was “crass and degrading” and therefore likely to cause serious offence to some visitors to the Pot Noodle Facebook page.

However, the regulator ruled the other two ads, although “mildly sexual”, were unlikely to cause serious offence, with the game more likely to be considered “puerile” than sexually explicit.

The complaint that the ads advocated removing women’s clothing without their consent was not upheld for any of the three executions.

The ASA said it considered consumers would understand that the use of the phrase “peel the top off a hottie” was a play on words and that, while some may find it distasteful, none of the ads suggested removing a woman’s clothing without her consent was acceptable.

Pot Noodle Facebook Post Banned for Being ‘Crass & Degrading’ to Women added by Newsroom on August 29, 2013
View all posts by Newsroom →