By Newsroom on August 29, 2018Comments Off on President Macron Visits New Carlsberg Glyptotek, as Carlsberg Group Invests in Kronenbourg Brewery 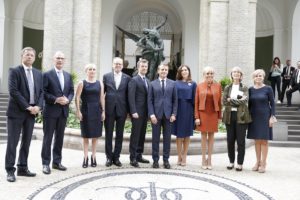 Following a business round table with the French President and Minister for Economic Affairs, the CEO of Carlsberg Group, Cees ‘t Hart, and the Chairman of the Carlsberg Foundation, Flemming Besenbacher, greeted the French Presidential Couple and the Danish Crown Prince Couple in the historic New Carlsberg Glyptotek in Copenhagen.

During the visit, Cees ‘t Hart announced Carlsberg’s plans to invest up to 100m EUR in the Kronenbourg brewery in Obernai; Carlsberg’s largest brewery in Europe. The investments will allow further modernisation and capacity increases as well as capability improvements and advances within Environment, Health & Safety.

“We are very pleased to make this announcement on the occasion of the French President’s visit to the New Carlsberg Glyptotek. Today, Carlsberg’s rich heritage and close ties to France are perfectly united with our ambitions to invest further in our successful French business,” says Carlsberg CEO, Cees ‘t Hart.

Carlsberg Group acquired Kronenbourg in 2008, and Kronenburg is now the leading French brewer. It offers iconic French beers such as Kronenbourg, 1664, 1664 Blanc and Tourtel Twist (Alcohol Free) in addition to Carlsberg’s successful international portfolio, including Carlsberg and the Belgian abbey beer Grimbergen. 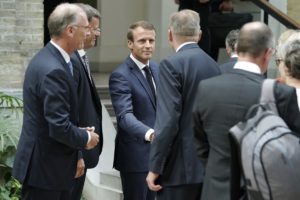 The investment plans follow several years of positive developments in France as well as the recent international success of the Kronenbourg 1664 beers. Especially the Kronenbourg wheat variant, 1664 Blanc, has experienced significant success in recent years, growing an additional 55% in the first half of 2018 and surpassing 100 million litres.

“We are proud of our position as the leading French brewer and of the impressive growth of Kronenbourg 1664 inside as well as outside of France. In order to continue to grow, we need to invest, and today’s announcement It is a testament to our shared values and promising growth opportunities,” says Carlsberg CEO, Cees ‘t Hart.

During the visit, guests were offered Carlsberg, 1664 Blanc and a limited edition Ensemble beer, brewed with French yeast specifically for the French President. The Danish Minister for Culture, Ms Mette Bock, also announced the New Carlsberg Foundation’s commissioning of Gobelin artwork production in France to be displayed in both countries as a symbol of cultural exchange.