By Newsroom on November 16, 2017Comments Off on Pret a Manger Tops iCrossing’s Christmas Sandwich Taste Test

Pret a Manger’s Christmas sandwich has triumphed in a battle of the seasonal sarnies conducted by the team at digital marketing agency iCrossing. 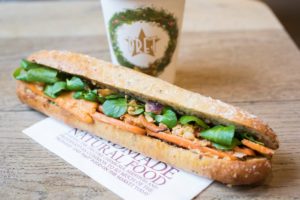 In addition to Pret, sandwiches were purchased at Marks & Spencer, Costa, Boots and Eat, with the offering from M&S (a client of iCrossing’s) securing the runner-up position in the final rankings.

Explaining the motivations behind the video, Noel Reynolds of iCrossing’s outreach team said:

“It’s the question on every office worker’s lips come November – what’s the best Christmas sandwich? We’re bidding farewell to our home on Carnaby Street ahead of our move next year, so as seasoned high-street sandwich eaters, we thought we’d get to the bottom of this, once and for all. iCrossing is a marketing agency for the modern world, so being current and understanding what’s on people’s mind is key. We spotted a gap in the social stratosphere that no other agency had covered, and we thought, let’s do it! Pulling this together took grit, creativity and determination to bring you the facts, but it was also lots of fun and we’re pretty pleased with the results.”