By Newsroom on April 26, 2013Comments Off on Pussy Ad Banned For Being ‘Sexually Explicit’ 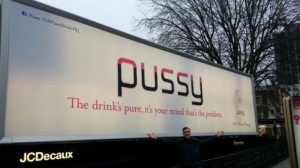 An ad for Pussy, the energy drink, has been banned for being “sexually explicit”, despite claiming complainants were “twisting the meaning of an innocent word”.

The Advertising Standards Authority ruled that one poster which stated “Pussy” in the centre, above “The drink’s pure, it’s your mind that’s the problem” in smaller text, could not appear again in its current form.

Two posters and a website, made by Beattie McGuinness Bungay, received a total of 156 complaints.

Most complainants felt that the ad was sexually explicit through the implied reference to the colloquial meaning of “pussy” to refer to female genitals. Others felt it was derogatory towards women and those with religious beliefs, and many also felt the ad should not have appeared in outdoor locations where it could be seen by children.

The ASA ruled that while the ad did not portray women in a derogatory way or offend religious people, it was sexually explicit and likely to cause widespread offence.

In its response, Pussy Drinks said it had not intended to offend, and that “the slang meaning of the word was not one that [it] had created, and that any problems were only caused by those who were twisting the meaning of an innocent word”.

Pussy Drinks added that it “considered it ironic that complaints had been made about offence caused, given that the posters clearly stated that the drink was pure and it was the mind of the viewer that was the problem”.

The drinks company pointed out the Oxford English Dictionary definition stated that a pussy was “a cat, particularly a kitten” and that until this definition was changed, it had a right to advertise the product.

Pussy added that the brand name was chosen to reflect Pussy’s “cool, beautiful, feline and natural” brand, and that the inspiration for the product and white can design was a “gorgeous white pussycat owned by a family member as a child.”

Pussy also questioned which religion would be offended by the ads, saying that the ancient Egyptians used to worship cats and “people of a religious disposition tended to occupy an idyllic place away from the crassness that sadly existed in mainstream society and therefore felt it was surprising that the complaints had been made”.

A second poster which read “Outrageous” and the pussydrinks.co.uk website, were not banned.

Pussy Ad Banned For Being ‘Sexually Explicit’ added by Newsroom on April 26, 2013
View all posts by Newsroom →