By Newsroom on February 14, 2013Comments Off on Red Bull Launches Three New Flavours 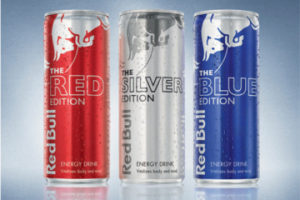 Red Bull has announced its marketing campaign for the launch of the Red Bull Editions; three new flavours (Cranberry, Lime and Blueberry) with the same vitalising effect as Red Bull Energy Drink.

The introduction of Red Bull Editions to the UK will be supported with a heavyweight £3.5 million campaign to drive awareness and product understanding.

Red Bull will begin their launch campaign for Red Bull Editions in March creating national awareness focusing on key cities throughout the UK.

Impact will be created building awareness via out of home media, through key poster sites, six sheets and each city having an impact hero site.

Large scale digital and PR activity will run alongside the campaign to further drive awareness.

The above the line campaign objectives are to raise awareness to the 4.5 million people in the UK who reject energy drinks on account of taste as well as broadening consumption with current drinkers.

Red Bull will also be driving trial through its Wings Team targeting over 1 million trialists through sampling activity.

The Red Bull Sampling team will be out in force in their Minis sampling all three flavours in 20 key cities across the UK giving consumers a taste of the three new flavours.

Simon Hewitt, Red Bull head of category said, “By addressing the barrier of taste, we expect drive increased penetration and grow the category, which ultimately means more profits for retailers.”