By Newsroom on June 13, 2016Comments Off on Rustlers Release Football Anthem for the UEFA Euros 2016

On the off chance England gets knocked out of the Euros (yet again), Rustlers, the hamburger brand, is releasing its own heart pounding, spirit-rousing and, frankly, completely realistic, factually accurate and logically sound, football anthem. The anthem is sung and performed by the one and only Chesney Hawkes and, the most capped England player of all time, Peter Shilton OBE.

At a time when many brands are talking up England’s chances, Rustler’s are highlighting the unfortunate truth that England have only ever won 9 games in Euro History and have never won a knockout game in 90 minutes. So, although we all hope England win, “let’s be realistic” 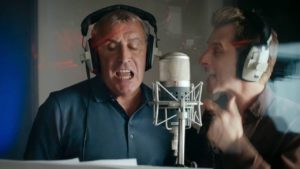 The rousing chorus of the ‘Rustlers Official Anthem of Crushing Reality’ goes: “Let’s be realistic, Let’s think logically, No trophies in half a century, Blame it on the ref or injury”, with verse lyrics such as: “No victory in 50 years. And yes, it could be 50 more. Best prepare for some tears. Cos our defence will likely let them score. Still our boys will have fun. Kicking a ball in the sun. Even though our chances are practically none.”

Peter Shilton sings/says: “Come on England. We haven’t made a final in 50 years. So what does it matter if we don’t win one more time? We invented the World Wide Web. Created the jet engine. And pioneered DNA sequencing.”

Rustlers is also releasing a limited edition flame grilled ‘Commiseration Burger’ for the Euros, each with its own sachet of mayonnaise and ketchup to create a patriotic St George’s flag on the burger.

Rustlers Release Football Anthem for the UEFA Euros 2016 added by Newsroom on June 13, 2016
View all posts by Newsroom →