By Newsroom on July 31, 2013Comments Off on Sainsbury’s to Release “Same Price, Different Values” Ad Campaign 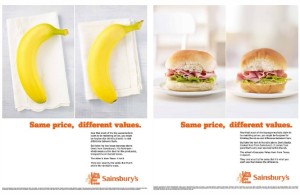 Sainsbury’s has responded to the Advertising Standards Authority (ASA) ruling not to ban the Tesco Price Promise, following its complaint that it was ‘misleading’ in its comparison claims.

The Sainsbury’s print ad campaign is expected to roll out using the slogan “same price, different values” in relation to where their own-brand produce is sourced, claiming a superior standard over Tesco.

In a blog on the Tesco website, chief marketing officer David Wood has said it is delighted by the ruling not to uphold the complaint made by Sainsbury’s.

The ASA however dismissed that complaint, explaining in its ruling “We considered consumers were likely to interpret the claim “You won’t lose out on big brands, fresh food or own-label” as a promise to compare the cost of their shopping with Tesco to the other named retailers.”

The ASA added that it believed that the claim “comparable grocery shopping” with rivals Asda, Sainsbury’s or Morrisons would be understood that Tesco has compared products with competitor prices, including own-label products.

In a blog on Tesco’s website, Wood responded by indicating that the supermarket was ahead of game and that its competitors were “trying to copy it.” He added that the origin of a product was important, however it should not stand in the way of a price comparison.

We and others have been comparing some grocery prices for some time. The innovation is in what Price Promise compares and how it makes it effortless for customers. Comparing brands is easy but customers don’t just shop for brands, they shop for fresh food – meat, fish, fruit and vegetables – and own-brands too. Nearly half the average customer basket is made up of own-brand products. We didn’t think comparing half the basket was good enough.

The Telegraph quotes Sainsbury’s commercial director Mike Coupe: “Tesco say that provenance and ethics are only a ‘minor part’ of customers’ considerations but that’s not what customers are telling us.”