By Newsroom on September 7, 2015Comments Off on Saka Natural Mineral Water Updates Its Label 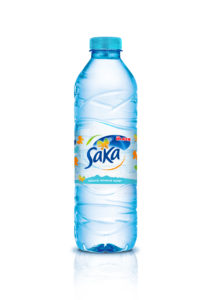 Saka natural mineral water has enjoyed a substantial growth over the past few years, it has become a strong recognisable brand, positioning itself as a key player in the UK bottled water market.

Not standing-still a new label has been launched and this label, effortlessly reflects the purity of Saka through its transparency. A splash of colour and the Saka butterflies adds playfulness coupled with the freshening up of the instantly recognisable mountain border and cap, now a brighter aqua blue, gives Saka a more contemporary and refreshing look. The new design has been rolled out across the entire Saka range

The launch of the new label was supported by a national campaign including nationwide buses, prime digital billboards (including the iconic M4 tower), supermarket in store/outdoors advertising, television advertising and re branding of the Saka fleet livery.

Saka also supports numerous running events throughout the country, delivering on its mission to hydrate Britain and encourage those to “activate a healthier lifestyle”.