By Newsroom on January 5, 2017Comments Off on Samuel Adams Introduces Two New Brews for One Season: Hopscape and Fresh as Helles 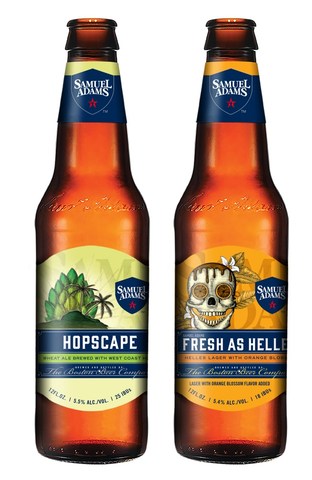 Samuel Adams was one of the first craft brewers to offer rotating beers that capture the essence of each season, and now, from January through April, the brewers are introducing drinkers to two new seasonal beers: Samuel Adams Hopscape and Fresh as Helles. It may be unconventional to have two seasonals at one time of year, but Sam Adams has never been known to follow the rules. The brewers felt that these two brews capture the essence of the ever-changing season across the country from January through April.

Available January and February, citrus and piney hop flavours with a nice lingering bitter finish make Hopscape best enjoyed during cold, brisk temperatures. While the honey malt aroma and orange blossom notes of Fresh as Helles make it a perfect pairing to welcome late spring weather during March and April.

“At the start of 1988 we introduced our first-ever seasonal beer, Samuel Adams Double Bock, a traditional spring beer originally brewed by German monks,” said Jim Koch, Samuel Adams founder and brewer. “While we pioneered rotating beers for the season, this season’s beers have changed more times than we can count. The variety in the weather during this time of year begs brewers and drinkers to explore flavours that match the ever-changing season. It might seem crazy, but after we brewed a few test batches of Hopscape and Fresh as Helles in our Nano Brewery, we knew we had two seasonal beers that captured the essence of the schizophrenic weather around this time of year.”

Brewer Megan Parisi continued, “With Hopscape, we knew we wanted to brew a hop-forward beer to match the bitterness of the cold. Our Sam Adams Nano Brewery gave us the chance to experiment with a variety of hop trials until we nailed the citrusy and piney flavour profile we were going for. On the flip side, for the more fickle side of this season, we knew we wanted to brew a more delicate beer. We found that our helles recipe created the perfect base for balancing the flavour of tangy Mandarina hops and floral orange blossom petals. As brewers, half the fun is brewing multiple trials until we get just the right flavour – or in our case flavours – that we’re looking for.”

Samuel Adams Introduces Two New Brews for One Season: Hopscape and Fresh as Helles added by Newsroom on January 5, 2017
View all posts by Newsroom →