Maxim’s MX, a chained fast food restaurant in Hong Kong, has revamped the classic dish by serving the boneless Hainan. To emphasize the extraordinary tender and silky texture and let all the gourmets in the city know about this hidden gem, Secret Tour Hong Kong created a campaign with local insight to grasp public attention.

A homophonic name was created, “Maxim’s MX SIR Chicken” consisting of two levels of meanings. First, the Maxim’s MX’s Chicken is so tasty that it deserves to be honoured as “SIR”; second, in Cantonese the pronunciation of “SIR” (sir-waat-gai) is a resemblance of the playground slide “SIR” (sir-waat-tai). 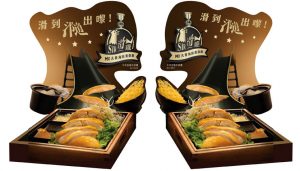 It is not just a meaningless resemblance, Secret Tour actually created a slide for “Sir Chicken” to test its silkiness to overcome the resistance. Who can imagine a piece of chicken sliding on a playground slide? Maxim’s MX is telling you that with the unusual tender and silky texture, it is possible!

The process was recorded and showed in video format. For the video’s voice over, to stand out the noble character of “Sir chicken”, Secret Tour collaborated with online celebrity, Uncle Siu’s British English Club, who is renowned for his authentic British accent.

The video is linked with a Facebook game, and audiences are invited to guess the duration of Sir Chicken’s ride on the slide. The fastest 10 participants with the correct answer will be rewarded a month of free Maxim’s MX’s Hainan Chicken Rice.

Together with the online video, Maxim’s MX has launched a set of publications. A wide range of media platforms, such as outdoor billboard, newspaper/magazine print ads, in-store posters and stickers, as well as badges on MX’s staff uniforms, have been covered throughout the campaign. Synergy between all the publications are attained with the playground slide metaphor for the chicken’s tenderness. 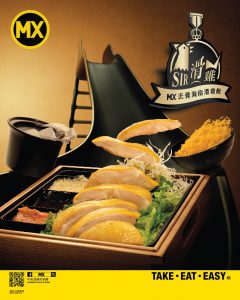