By Newsroom on May 23, 2014Comments Off on #SharetheDerby: Coca-Cola Machines Unite Rival Football Fans in Milan

One iconic city. Two iconic football teams. Welcome to Milan, Italy – home to one of the world’s fiercest sporting rivalries.

When the famous red and black of A.C. Milan meets the blue and black of Internazionale (Inter), the city goes into lockdown, bracing itself for the biggest cross-town derby in all of sport.

Friends and families become foes. Shops shut their doors to customers from “the other side.” The rivalry’s almost spiritual scale is reflected by the match’s local name, Derby della Madonnina, in honor of the statue of the Virgin Mary on the top of Milan’s famous Duomo. 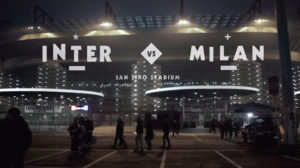 In the latest legendary clash of the titans earlier this month, Milan edged out Inter 1-0. The match was a little different, however, thanks to Coca-Cola Italy’s quest to build bridges and share goodwill between Milan’s tribal sets of fans.

A new film shows the results of an uplifting experiment conducted in December 2013 at a previous Milan derby, when Coca-Cola placed two vending machines in the opposing fans’ areas of the San Siro stadium. One machine was at the Inter fans’ entrance and the other at the Milan end.

But these were not ordinary machines. Connected through video and audio, they didn’t dispense drinks to the person standing in front of them. Instead, they allowed patrons to “share” a Coke with an opposing fan across the stadium. With the push of a button, fans could send a Coke to someone standing at the other machine. They could refresh and, heaven forbid, share a Coke with “the enemy.”

Before long, the goodness and sense of fair play in the heart of every fan shone though, and peace broke out in Milan. Fans enthusiastically sent Cokes tumbling into each others’ machines, laughing, taunting playfully and sharing messages through the live video link. In less than an hour, both machines were empty, ensuring that fair play and togetherness were the real winners before the match even started. 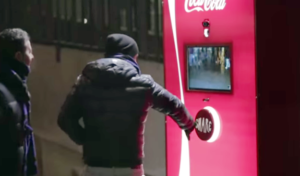 As the teams prepared to meet again on May 4, Coca-Cola Italy released the film to encourage an unlikely outbreak of love between the archrivals, who shared the video among themselves. A special Facebook event generated buzz without revealing the film’s full details. Meanwhile, the #ShareTheDerby hashtag began to quickly spread the word on Twitter.

The film, which has been viewed more than 500,000 times, is part of Coca-Cola Italy’s “Share the Good’ campaign celebrating acts of kindness and the good deeds of everyday heroes. The idea for the Milan video was inspired by “Small World Machines,” Coke’s experiment to break down barriers and create a simple moment of connection between India and Pakistan. A live communications portal between people in the two divided countries showed that what unites us is stronger than what sets us apart. The Italian team localized the concept, using football and the intense rivalry of Milanese fans as a powerful story to connect with Italians. 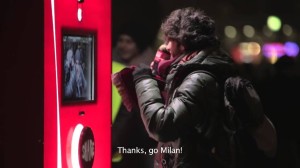 “This shows that simple ideas and everyday insights can engage and motivate people in a powerful way. At the same time, they also give us moments of happiness to be shared,” says Fabrizio Nucifora, marketing activation director, Coca-Cola Italy. “In this special case, the main protagonist is football, with its values of participation, passion for the colors of the team, fair play and fun. These all perfectly reflect and embody the messages that Coca-Cola wants to promote.”

“For Coca-Cola, this universal value is the idea of positivity,” she says. “We always see the world, the tensions in the world, what’s going on around us, through the lens of optimism. Those are the stories that people want to hear, tell and, most importantly, share.”

#SharetheDerby: Coca-Cola Machines Unite Rival Football Fans in Milan added by Newsroom on May 23, 2014
View all posts by Newsroom →