By Newsroom on January 9, 2015Comments Off on Skittles Makes Super Bowl XLIX Awesomer with its First Super Bowl Ad

Super Bowl XLIX just got awesomer: The Skittles brand announced that it will be airing its first-ever Super Bowl ad, and it will be celebrating its first official inclusion in The Big Game in a variety of unexpected ways in the weeks leading up to the Feb. 1 kickoff.

As an official sponsor of the NFL, Skittles is activating the partnership for the first time following a tremendously successful relationship in 2014 with Marshawn Lynch and the Seattle Seahawks.

“We couldn’t be more excited to be an official NFL sponsor and first-time Super Bowl advertiser,” said Matt Montei, Senior Marketing Director, Confections and Seasonal at Wrigley. “We know that Skittles can help make an already awesome game even awesomer for fans everywhere.” 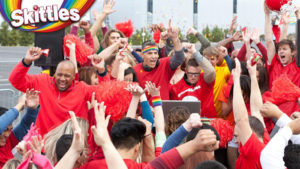 Because Skittles couldn’t wait to kick off its first-ever official Super Bowl season, the brand hosted the most awesome tailgate in the vacant parking lot of the site of Super Bowl XLIX – nearly four weeks before football’s grand finale. Skittles invited Super Bowl champion and Arizona native, Kurt Warner, and some diehard fans to experience a Skittles-style tailgate party.

“Since we’re new to this party, we are celebrating in ways only Skittles can – with a twist and this is just the beginning of a big playoff run for Skittles,” Montei added.

The Skittles brand will release more activities throughout the month of January. For Super Bowl XLIX, Skittles will run a 30-second television commercial produced by DDB Chicago.