By Newsroom on March 20, 2013Comments Off on Smirnoff Readies Real-time Social Hub

Smirnoff is developing an online app that allows fans to direct personalised videos of their nights-outs using content from all their social media channels.

The ‘Mixhibit’ app, which is currently being trialled, incorporates selected photos, tweets and check-ins into a video set to a custom soundtrack.

Users will be able to share videos through social networks when the hub launches this summer.

The app aims to make it easier for fans to streamline recordings of their nights-outs at a time when many are active across several social networks.

It will run alongside the vodka brand’s other crowdsourcing platform ‘Nightlife Experience’ in a bid to build closer ties to its more creative fans. 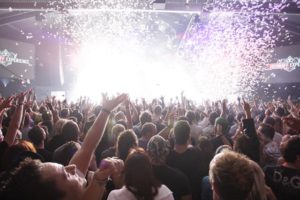 The move is the latest push from Smirnoff to leverage user-generated content in its campaigns with the brand identifying branded social hubs as a key channel for growth in the coming years.

Last year, it launched a YouTube branded channel in partnership with Amazon to showcase drink and nightlife suggestions from its fans.

The app will not gather any private user data with fans self-selecting the content they want to appear in the video.

Lynx is running a mobile app that allows men to stream real-time updates of their evenings. The platform also acts as a media channel for wider marketing campaigns where content can be published directly to Lynx followers.