By Newsroom on November 29, 2016Comments Off on Snickers Returns to WrestleMania After Scoring 1.5 Billion Brand Impressions 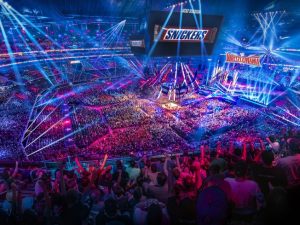 Snickers is stepping back in the ring with WWE’s signature WrestleMania event, which scored the brand 1.5 billion sponsorship impressions this year.

The partnership—with Snickers returning as the “exclusive presenting partner” of the event attended by more than 101,000 people—will continue Snickers’ long-running “You’re Not You When You’re Hungry” campaign, this time with a new TV spot featuring WWE superstars.

WrestleMania33, airing live on WWE Network from Orlando in April, is one of the marquee events for the massively popular wrestling organization. Last year’s event was the highest grossing and most watched in WWE history, tallying $17.3 million and reaching 1.8 million households.

According to the WWE, Snickers’ sponsorship of WrestleMania earlier this year netted 1.5 billion impressions “across WWE’s and NBCUniversal’s global platforms, including TV integrations, digital and social media, retail activation and appearances by WWE superstars.”

The new “You’re Not You When You’re Hungry” TV spot will air early next year on WWE’s digital and social platforms, WWE Network, and Monday Night Raw and SmackDown Live on USA Network. Snickers also will take over WWE’s YouTube channel on the day of WrestleMania and will create custom digital and social content, including a Snapchat live story. The brand will also have promotional content during the WrestleMania Axxess fan festival.

“We’re back … once again to share our ‘You’re Not You When You’re Hungry’ message to an extremely engaged WWE fan base in unique ways,” said Allison Miazga-Bedrick, director of the Snickers brand, in a statement. “When it comes to displaying the hunger symptoms that Snickers satisfies, nobody embodies them better than WWE superstars.”

The brand has previously worked with WWE to create several event-specific installments of its mixed-personality campaign:

WWE’s popularity, boasting 750 million social media followers and the No. 1 sports channel on YouTube, has made several brands want to connect with its fan base through fun YouTube videos and event integrations.

KFC filmed a video for SummerSlam with WWE stars Dolph Ziggler and The Miz. Ziggler, dressed as the Colonel, took down The Miz, who was wearing a chicken costume. In June, Cricket Wireless released a video with WWE star John Cena, where Cena burst through a fake wall of a Cricket Wireless store to surprise fans with meet and greets:

Snickers Returns to WrestleMania After Scoring 1.5 Billion Brand Impressions added by Newsroom on November 29, 2016
View all posts by Newsroom →