By Newsroom on October 23, 2017Comments Off on Somerdale And Rodda’s Team Up to Export Classic Cornish Clotted Cream To Australia 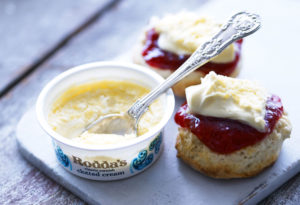 Rodda’s, the oldest and largest clotted cream company in the world, has teamed up with Somerdale International, the leading exporter of British cheese & dairy products, to take the authentic taste of Cornish Clotted Cream to Australia. The first deliveries of the Classic Cornish Clotted Cream are set to reach the shores of Australia this week. The cream will be made available to high-end retailers, delis, hotels and cafes initially in New South Wales and Victoria and in due course to distributors in Western Australia and South Australia.

The Rodda family have been making Cornish clotted cream on the same site for five generations using the same passion, expertise and traditional cooking method for over 125 years. Made solely from rich, local Cornish milk, the cream is separated off and gently baked until it’s thick & silky and a delicate golden crust has formed. The quality and authenticity of the Rodda’s Cornish Clotted Cream is recognised by its holding of a Protected Designation of Origin status – a European Union award designed to protect traditional, regional foods against imitation.
Cornish Clotted Cream is the quintessential ingredient of the traditional English cream tea. Although still the perfect partner for a scone and jam, today clotted cream often accompanies a range of puddings and is also now frequently being used by chefs and lovers of fine foods as an ingredient to add a bit of luxury to sweet and savoury dishes. 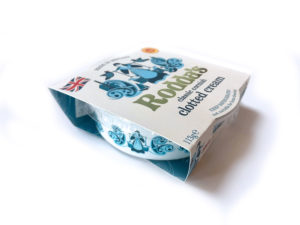 To ensure that the Clotted Cream arrives in Australia in perfect condition it will be frozen and then gently defrosted before being sent out to customers and distributors. The distinctively branded Rodda Classic Cornish Clotted Cream will be available in a range of convenient pack sizes including:
• 20g portions ideal for use on airlines, cruise ships and in top-end hotels and cafes
• 113g retail backs ideal for high-end delis and retailers
• 907g food service pack for distributors to hotels, restaurants and cafes.

Di Jones, head of Somerdale’s Australian operations, who is currently in discussion with a number of retail and foodservice customers on their stocking the clotted cream said:
“The quality and taste of Rodda Cornish Clotted Cream combined with its PDO provenance means that there is nothing quite like it in Australia. At Somerdale, we are seeing a growing demand in Australia for premium products with a distinctive taste and authentic provenance. Although customers will naturally look to purchase Australian produce if they can, they are willing to try imported products if there isn’t a comparable locally produced product.

“At the same time, high-end hotels, cafes, cruise ships and premium airlines are now making cream teas part of their food offer and the ability to add value by offering authentic Cornish Clotted Cream will be attractive to them, thereby increasing demand.”

Rodda’s Managing Director, Nicholas Rodda, comments: “When my great-great-grandmother started making Cornish clotted cream in her farmhouse kitchen over 125 years ago the idea of sending our Cornish delicacy to Australia would be something she would never have dreamed of. As a family business, we are delighted that our Cornish clotted cream will help to bring a taste of Cornwall to the cream tea in Australia.”

Somerdale And Rodda’s Team Up to Export Classic Cornish Clotted Cream To Australia added by Newsroom on October 23, 2017
View all posts by Newsroom →