By Newsroom on February 16, 2017Comments Off on Sparkling Ice Unveils Integrated Marketing Campaign “Be Not Bland” in the US

Talking Rain Beverage Company, the maker of Sparkling Ice flavoured sparkling waters, launched a new, multi-faceted advertising campaign – Be Not Bland in the US. The brand’s first campaign to feature a series of commercial advertisements airing nationally, Be Not Bland embraces authenticity and individuality, celebrating the people, places and personalities that fill life with flavour and “not bland” moments. 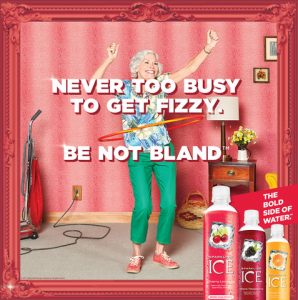 “The Sparkling Ice brand journey has been far from bland,” said Kevin Klock, President and CEO of Talking Rain Beverage Co. “With over 6,000% sales growth since 2010, expansion into international markets, the addition of new line extensions, exciting brand partnerships and more, the time was right to roll out a campaign of this magnitude and attitude. Through Be Not Bland, Sparkling Ice will have an opportunity to showcase our brand personality and harness the momentum of this growth to reach a wider audience than ever before.”

The $37 million campaign, whose mantra “Drink Not Bland. Be Not Bland,” was conceptualized and executed by Seattle-based Wexley School for Girls, the Sparkling Ice Creative Agency of Record. The Be Not Bland television spots will run on broadcast and cable networks including ABC, ESPN, E!, BRAVO and Comedy Central, among others.

“This campaign takes routine, bland moments and makes them not bland, just like how Sparkling Ice ‘unblands’ plain old water. The advertisements are basically a personification of the brand in an interesting and engaging format,” said Ian Cohen, Executive Creative Director and Co-Founder at Wexley School for Girls.

To bring Be Not Bland to life, Sparkling Ice and Wexley School for Girls collaborated with comedy director Baker Smith to produce the brand’s commercial spots. Shot in Los Angeles by award-winning production company Harvest Films, the campaign will debut three new television spots focused on modern families in recognizable, every-day moments with one big twist.  In fact, the brand’s lead spot depicts a family at the dinner table. 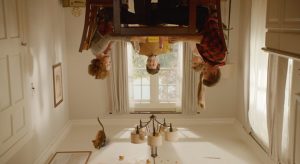 However, the entire spot was filmed with the cast and set flipped completely upside down – leading to some truly authentic and comedic moments that clearly showcase the idea that “Sparkling Ice isn’t bland, so their advertising can’t be either.”

“We are proud to have partnered with Sparkling Ice and Wexley School for Girls on these amazing, bold concepts,” added Bonnie Goldfarb, Executive Producer and Co-Founder of Harvest Films. “Ian and his team have led the group with scripts and creative that are memorable and resonate, and they allowed the process to breathe and keep getting better.”

The Sparkling Ice Be Not Bland campaign will kick off on February 15, with an integration on ABC’s The Chew that same week.  Commercials will debut in conjunction with national print, online and interactive digital media, along with innovative field and in-store elements (3D graphics, scented displays) that play across all senses.

Sparkling Ice Unveils Integrated Marketing Campaign “Be Not Bland” in the US added by Newsroom on February 16, 2017
View all posts by Newsroom →