By Newsroom on May 14, 2014Comments Off on Starbucks Barista in London Creates Elaborate Cup Art for a Few Lucky Customers 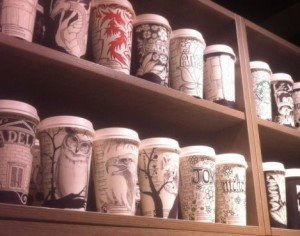 The British Museum is home to about 8 million pieces of work that illustrate and document the story of human culture. A Starbucks store across the street from the central London museum is home to a much smaller display of a French artist’s work.

He’s been a Starbucks barista for about three years, and for the past couple of years he’s been surprising customers with intricate designs of their names.

“I don’t think about getting any reward with this other than making people happy,” Nkweti said. “When you give a cup to someone and he or she smiles, then I go back to work with a huge smile on my face too.”

He gets requests from tourists who come to the coffee shop from Japan, Italy, the U.S. and other parts of the world hoping to have a cup created just for them. The artistic barista needs to be selective though because designing cups is a hobby he does away from work. The customers he has designed cups for have all expressed “a special kindness” when they were in the store. 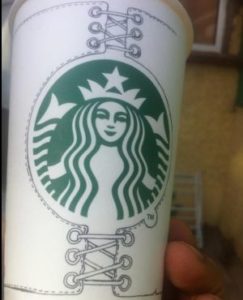 So far Nkweti, 41, has created about 100 personalized cups for customers. Most designs take between two and three hours to make. He’s put in as many as 40 hours on a few of the more elaborate cup illustrations. While there’s no time for fancy cup art when Nkweti is at work, he finds time to draw when he’s commuting on the Tube or at home watching television.

“Sometimes I wake up at 4:00 in the morning and I have to begin drawing because I have a design idea,” he said. “It’s like the image is printed in my mind and it needs to get out.”

Nkweti said the best part of his job is getting to know customers, starting with their names.

One of his favorite customer name cup designs features a mask for “Georgina.”

“I love the idea of masks because of the mystery they create about people,” he said. “You never know who is behind there. We all have masks, until we get to know each other.”

Images of Nkweti’s cup art have gotten international attention through news articles in the UK and online. Nkweti said he’s “shy” and isn’t used to the sudden interest in what he’s been doing for years.

For many years, customers have also been decorating Starbucks cups. Several thousand designs were submitted for the Starbucks White Cup Contest. The entry deadline has passed. Now the challenge will be narrowing the entries to a few finalists and ultimately picking a winner.

Starbucks Barista in London Creates Elaborate Cup Art for a Few Lucky Customers added by Newsroom on May 14, 2014
View all posts by Newsroom →