By Newsroom on September 8, 2014Comments Off on Stoli Claims its Position as “THE Vodka” & Launches New National Campaign 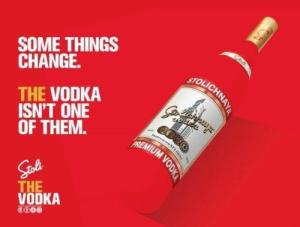 Stoli Vodka announced the launch of its new advertising campaign, “THE Vodka.” Produced by Richmond-based The Martin Agency, the campaign is the brand’s first major advertising effort since the inception of Stoli Group USA this January 2014.

The campaign boldly celebrates the brand’s authenticity and places the spotlight on Stoli’s heritage as a trailblazer in the vodka category for the past 80 years.  The creative aims to make a departure from an industry flooded with the superficiality of over-designed bottles and over-idealized lifestyles. Elements of the campaign capture what it means to be “THE Vodka,” a title reserved for Stoli as the original premium imported vodka in the United States, the first vodka brand in space and the pioneers of vodka flavors.  The new campaign, which will be used across global markets as well as the U.S., toasts this iconic heritage and bold character, declaring to all that Stoli is “THE Vodka.”

“‘THE Vodka’ campaign firmly supports Stoli’s commitment to stay true to our longstanding heritage and unwavering focus on what is the most important—the spirit inside the iconic Stoli bottle,” said Lori Tieszen, CMO of Stoli Group USA, “This campaign represents what people crave from their vodka: something authentic; something bold; something real.”

“One of the best examples of Stoli’s authenticity is their iconic label. Unlike the many over-designed vodka bottles you see on shelves today, Stoli has been consistent and stayed true to its character since the beginning,” said Jorge Calleja, Global Group Creative Director, The Martin Agency.  “We wanted to showcase the iconography that has made Stoli ‘THE Vodka’ and explore the difference between what it means to be artificial vs. authentic.  Do you want to have ‘a’ night or ‘THE’ night? Do you want to drink ‘a’ vodka or ‘THE Vodka’?”

The campaign launches today in the United States with a total redesign of the brand’s website, print campaign, and out-of-home advertisements appearing in major cities around the country including New York, Los Angeles, Miami, Chicago, and Boston. A full range of digital content will reach Stoli’s target audience of millennials through online partners including Grooveshark, Playboy, Esquire, Mashable, Complex, DailyBreak, and UnRuly.

Creative executions will highlight the difference between being one of many versus being an original, including an ongoing series of animated videos made specifically for social media. The short, irreverent videos are illustrated by renowned graphic novelist and designer Andrew Rae, and will be released every week through the end of the year.

To further celebrate what it takes to be a “THE,” Stoli is going on a tour of the country to pay homage to the people and places that have shaped nightlife culture within the United States and set the stage for the epic nightlife scenes of today.  From the bartender to the club promoter, the legendary music venues to the DJs, Stoli will tell the story of their journey to the iconic status they hold today. Beginning on Avenue A in New York City’s East Village this October, Stoli will celebrate one legendary epicenter of nightlife culture and how the local characters, its denizens and doyennes, have turned just a street in the city into “THE” street.

The campaign will continue through 2015 to celebrate nightlife scenes across the nation, spanning over 10 markets including Los Angeles, Chicago, San Francisco, and Miami.

Stoli Claims its Position as “THE Vodka” & Launches New National Campaign added by Newsroom on September 8, 2014
View all posts by Newsroom →