By Newsroom on November 17, 2017Comments Off on Subway Gives Away 13 million Meals to Hunger-Relief Charities via J. Walter Thompson Sydney

In a global, real-time data-led campaign devised and executed by J. Walter Thompson Sydney, more than 40,000 Subway restaurants in more than 60 countries recently invited customers to join the Subway Live Feed to help fight hunger around the world. 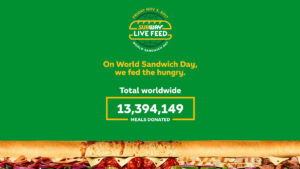 For every Sub bought, Subway gave a meal to someone in need through partner charities. Meals donated on World Sandwich Day were tracked through the Subway Live Feed digital ticker in real time.

For the majority of participating countries, a live API sourced from Subway’s point-of-sale devices at the restaurants was used to demonstrate in real time a country-specific and global live tally of the number of meals that Subway was giving to charity. 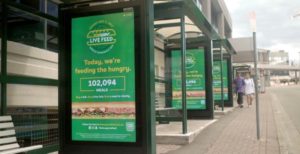 Individual countries displayed their tally on their campaign microsite, on digital banners and on dynamic outdoor billboards around the world, including 42nd Street, NYC. Word was also spread via social.

The data driven idea was conceived and developed locally by J. Walter Thompson Sydney and then expanded to a global campaign with reach in 60 countries. 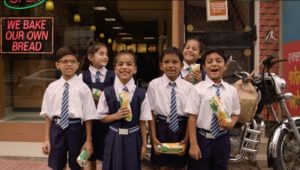 The campaign was supported by a robust public relations campaign that worked to engage corporate staff, Franchisees and Sandwich Artists in the lead up to the day, as well as drive awareness with guests through influencer content and local area marketing. The J. Walter Thompson campaign in Australia was supported by other WPP AUNZ agencies including Webling, PPR and Ikon.

Chris Carroll, chief advertising officer at Subway said: “The Live Feed concept has been our first globally activated campaign for the brand and it is a huge success. Subway Live Feed enabled us to engage with our guests in ways we haven’t before – from using live data to drive momentum, and empowering our staff and guests to make a real difference to people in need. It is really promising to see our Australian agency, J. Walter Thompson, leading a very successful global campaign, and we look forward to making this an annual campaign for Subway.”

Subway Gives Away 13 million Meals to Hunger-Relief Charities via J. Walter Thompson Sydney added by Newsroom on November 17, 2017
View all posts by Newsroom →