By Newsroom on November 21, 2013Comments Off on The Kraken Rum Releases “Black Ink” on Unsuspecting Nation

It’s happened: The Kraken has burst from the realm of myth into the living world—and into living rooms across America.

The action is set to Bobby Darin’s classic recording of “Beyond the Sea,” creating an eerie contrast that lends the spot a big-budget, major motion picture feel. 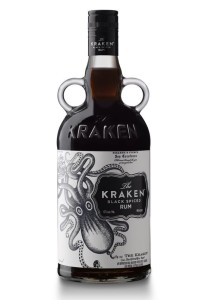 The new commercial was animated by Blur Studio, the CGI powerhouse behind the bleeding-edge animation featured in films like “Girl with the Dragon Tattoo” and “Avatar” and games like “BioShock Infinite” and “Halo 4.” The spot was produced by Proximo and Brooklyn, NY-based agency Dead As We Know It.

The spot will run across a number of major leading cable networks, including ESPN, AMC, FX, Discovery, and Comedy Central. The campaign represents a big step up for Kraken Rum, a category innovator that launched internationally in 2010 and is now one of the fastest-growing rum brands in the U.S.

Coinciding with the TV and digital release, The Kraken is launching a new trade advertising campaign taking the iconic bottle’s look and feel to a new level. Designed to bring the viewer underwater where the heroic Kraken bottle is illuminated by light rays from the surface, the new trade recalls the Kraken itself, lying in wait for an opportunity to strike.

The new Kraken Rum campaign is designed to bring the brand to life in a dramatic new way.

From its unforgettable bottle to its innovative marketing, The Kraken tells a compelling story—and this new chapter is the most exciting yet, perfect for introducing it to an even wider audience.

The Kraken Rum Releases “Black Ink” on Unsuspecting Nation added by Newsroom on November 21, 2013
View all posts by Newsroom →