By Newsroom on January 20, 2016Comments Off on Theakston’s Brew Noah’s Ark Ale To Help Raise Funds For Flood Victims 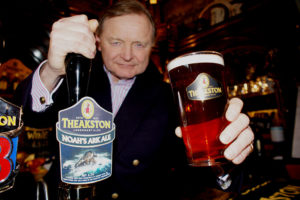 Masham brewers T&R Theakston Ltd have brewed a special beer to help raise funds to aid the thousands of people in the north of the country affected by the recent winter storms.

For every pint of Theakston Noah’s Ark Ale sold, Theakston’s will donate 10p to be distributed in the north of England by a network of Community Foundations in Cumbria, Yorkshire, and Lancashire, and in the north east of Scotland, through the Prince’s Countryside Fund, to help bring relief to these communities.

The beer is a 4.3 per cent ABV, amber, full-bodied bitter in the classic pale ale style and has a pronounced citrus taste and aroma.

Theakston Noah’s Ark Ale will be brewed in the family-owned firm’s famous Masham brewery, close to River Ure in the Yorkshire Dales, and will be available for sale in targeted pubs and clubs in the north of the country from mid-January.

T&R Theakston Ltd Executive Director Simon Theakston said: “We have all been horrified by the extent of the recent flooding and the severe impact on the lives of individuals and households all over the north of the country. We wanted to do something directly to help, and so decided to do what we do best and to create a new brew to help raise funds to directly aid the affected regions.”

“For every pint of Noah’s Ark Ale sold we shall be donating 10p to community foundations covering the north of England, our home patch, and affected areas in north east Scotland. We very much expect that the beer will go down well with our customers, and that a worthy sum is raised for such a compelling cause,” added Simon.

Noah’s Ark Ale will be available for sale from January 20 and will be supplied through all existing Theakston supply channels.