By Newsroom on January 5, 2016Comments Off on Tiger Beer Releases the World’s First Film Created on Beer Coasters

To launch Tiger White in Malaysia, Tiger Beer has put its ‘It all starts with White’ platform to the test and given beer drinkers the chance to be part of a major creative production unlike any in history.

Coaster is the first-ever film to be conceptualised, crowd-sourced and produced by consumers using beer coasters. On December 19, the 14-minute movie premiered in Kuala Lumpur, Malaysia, and garnered rave reviews from guests. A suspense packed thriller, the film centres on the adventures of a young chef who is asked to cook for the same mobster that murdered his father 18 years before. International director Baltasar Kormákur helped collaborate on the production of the film, serving as mentor and guide to the budding filmmakers.

The Coaster project is part of a campaign for the launch of Tiger White Beer in Malaysia. Customers from bars across Malaysia were encouraged to unleash their creativity and pen their best ideas and plots on beer coasters for the chance to be part of the unique film production.

“We are delighted to unveil what is possibly the most revolutionary platform ever used to produce a film. We drafted regular bar hoppers and transformed them overnight into filmmakers, with white beer coasters serving as mini-screenplays, storyboards and entry forms. Malaysian consumers are extremely savvy and creative, and we were excited to launch this contest in such a receptive, dynamic market,” said Mie-Leng Wong, Global Brand Director at Tiger Beer.

Tiger White, Asia’s wheat beer, was introduced in Malaysia this November. With the brand belief, “It all starts with white,” Tiger White’s advertising message is that anybody can create anything they want, if they have the courage to start with a bold, first step.

“The production of any film, no matter how big, starts with a clean white page, a blank canvas. This is where creativity begins. At Tiger, we asked ourselves, what would be our beer’s symbolic white page? The coaster, of course,” added Ms. Wong.

Tiger Beer partnered with Droga5 Advertising in Australia to conceptualise the Coaster campaign, the agency’s last work before closing their Sydney office.

According to David Nobay, Creative Chairman of Droga5 Australia, “Our teams have spent considerable time in production across Asia, working on Tiger Beer. One thing really came through to us…just how much creativity is alive and kicking on the streets; from Ho Chi Min to Hong Kong and Singapore. From fashion to technology, the region feels even more on fire right now. We were keen to put all that urgency and spontaneity to work across a single creative platform and we’re really pleased how quickly Malaysia grabbed the baton – first with the launch of Tiger White, and now through the debut of the world’s first film to be created on coasters.”

The Coaster filmmaking contest took place through October and November when thousands of coasters were distributed around Malaysia’s most popular bars. The coasters served as entry forms for the public and creatively-inclined participants, and online entries were also submitted through TigerCoasterFilm.com. 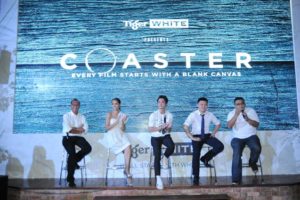 The winning participants were assigned a wide variety of roles including director, scriptwriters, actors, stylists, assistants, and even runners for the production of Coaster.

To make the experience more exciting, the acclaimed international director Baltasar Kormákur was brought into the project to help guide and mentor the bar hoppers-turned-film crew. Kormákur directed the Hollywood blockbuster movie, “Everest”, which opened the Venice International Film Festival earlier this year. Starring Jake Gylenhall and Keira Knightley and based on real life events, “Everest” follows the travails of mountaineers trapped in a blizzard on Mount Everest.

“I was invited by Tiger to take on a mentoring role in this film and I’m a big believer that you can achieve anything you want regardless of where you come from – whether it’s Iceland or Malaysia. If you dream big, you can achieve big. I’ve had to scale mountains and even swim in the North Atlantic Ocean for my other movies, but this is my first time to recruit people to make a film from beer coasters,” said Kormákur.

The winners of the Coaster filmmaking contest included individuals and professionals of diverse background and skills.

Cho We Jun, a banker turned director, was selected as the director of Coaster. He said submitting his application and eventually being selected marked a turning point in his life. “Not long ago I was working in a bank, following a path I didn’t want to take. I’ve made a few films before but none like this. I never imagined working with a director like Baltasar Kormákur to produce a film on this scale.”

“The entire crew has been amazing” said Cho We Jun. “We come from all walks of life – bankers, engineers, flight attendants – but we all stepped out of our comfort zones and produced something that we are all extremely proud of.” 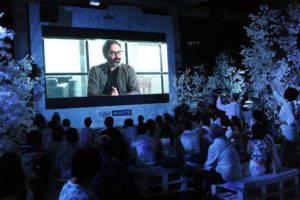 Nikolas Cheah, who was selected to be the production assistant and runner on the film set, commented, “I hope our project inspires others to pursue their dreams, no matter how far-fetched they may seem today. Through this contest, Tiger challenged us to take our creativity to a whole new level. Many of us will probably stick to our regular day jobs, but we will always relish this rare, once-in-a-lifetime experience to be part of a movie that the general pubic will get to see.”

Tiger Beer’s Ms. Wong concluded, “We were overwhelmed by the tremendous response to our project. It’s heartening to see that today’s generation isn’t bound by traditional rules and they’re courageous enough to test new experiences. Whether it’s planning the night ahead or pondering someone’s future career – everything starts from a fresh, white slate and the most brilliant ideas or opportunities can come from anyone, anywhere, at any time. We believe Coaster captures that spirit of spontaneity and the thrill of opening yourself up to a world with endless.