By Newsroom on December 1, 2017Comments Off on Tilt Your Screen for Birra Moretti’s Latest Ad from Armando Testa

In May, Heineken‘s Birra Moretti opened the doors to ‘Il Paese coi baffi’ (The Moustache Village), together with agency Armando Testa.

The ads follow the lives of the characters who inhabit this fabulous place, suspended in time, in which all the events revolve around Moretti’s brewery. 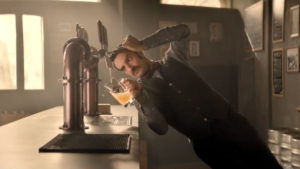 With the latest spot ‘Spillo’, we reach the fifth chapter of the saga. And this time we get to meet the barman of this quirky village.

Spillo is a cheerfully maniacal man, whose only goal is to pour the perfect beer. That’s why he lives at a 45° angle. So we see him crossing the tight districts of the village with his inclined bike, and going in to the bar where, with great attention and precision, he prepares a Birra Moretti as only he can do.

‘Spillo’, along with the other spots in the series, was shot for TV and web by The Family director Vesa Manninen.

Tilt Your Screen for Birra Moretti’s Latest Ad from Armando Testa added by Newsroom on December 1, 2017
View all posts by Newsroom →