By Newsroom on July 6, 2015Comments Off on Tim Henman Serves Up Wimbledon for Iris’ New Robinsons Campaign

This year, Robinsons will celebrate 80 years of partnership with the greatest tennis tournament on earth; Wimbledon. Not satisfied with quenching the thirst of the lucky few in the stadium, or the die hard fans there rain or shine on Henman Hill – Robinsons wanted to get everyone across Britain involved in a campaign that celebrated eight decades of thirsty play. 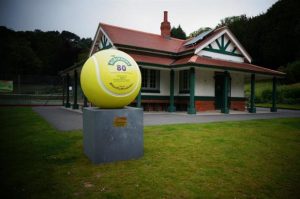 Working with Iris, the creative innovation network, Robinsons will be launching Hunt For Wimbledon; hiding multiple giant tennis balls across the nation for families to find.

Families will be able to follow the clues through Robinsons and Wimbledon Twitter pages, guided by Robinsons brand ambassador Tim Henman. Iris created a launch film, featuring Henman, to kick off the campaign, build excitement and get people talking across the country about Robinsons.

If spotted, tweeting a pic with #HuntForWimbledon could secure tennis fans some smashing prizes, from tennis kits to VIP days at Wimbledon.

Tim Henman Serves Up Wimbledon for Iris’ New Robinsons Campaign added by Newsroom on July 6, 2015
View all posts by Newsroom →