By Newsroom on September 25, 2013Comments Off on Tribal WW Launches Mobile-Led, Multifaceted Campaign for McDonald’s 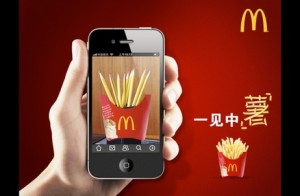 The campaign leverages the mobile platform where users of Meitu are encouraged to snap pictures of everyday items that resemble fries and collect them into their virtual ‘McDonald’s Fries Box.’ By sharing the pictures on their social media channels, participants will have the opportunity to be rewarded with free fries at McDonald’s.

The “I See Fries” campaign aims to encourage consumers to see an iconic product, McDonald’s Fries, in a new, irresistible light.

The core idea of “I See Fries” was co-created by Tribal Worldwide Shanghai and DDB Group Sydney, as part of a regional initiative that leveraged a number of offices within the DDB Asia Pacific creative network. The campaign idea was developed through collaborative efforts between the two agencies and then extended by McDonald’s partner Agencies to apply to multiple channels covering mobile, TVC, outdoor installations, in-store POP and social media.

Through urging consumers to “see fries” in everyday objects, the campaign aims to spark associated cravings for . McDonald’s Fries, an iconic product  hoping to earn “likes” as the people’s choice and as the Chinese consumers’ favorite.

Craig Lonnee, Chief Development Officer of DDB Asia Pacific & DDB China Group says, “The campaign embodies DDB’s conviction in the context of activating ideas that have a social effect, which we call Social Creativity — ideas that people want to plug into, participate in, play with, produce and pass on.”

Throughout the month long duration of the campaign, McDonald’s China is offering a buy-one-get-one-free promotion on McDonald’s Large Fries to further motivate consumers.

The “I See Fries” campaign can be found here.