By Newsroom on August 16, 2017Comments Off on Tulips and Chimneys Bring Snow to South Africa in their New Spot for Cerebos and FCB Durban 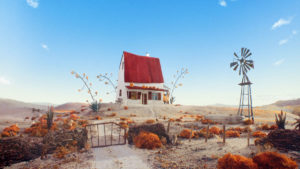 The FCB Durban spot tells the story of Mpho, a little girl who dreams of snow, despite living in the Karoo. Her grandparents intervene to help her dream come true – with a little help from Cerebos (cue their classic ‘see how it runs’ tagline).

A lot of thought went into the shape of the characters. “Mpho is shaped like an upside-down triangle,” says director Ree Treweek. 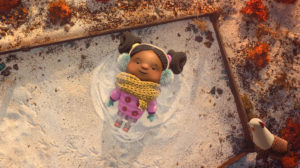 “Her cuteness factor largely comes from her having such a big head in relation to her body and her tiny feet. Her grandma on the other hand is bell-shaped, completely the opposite or rather the reverse of Mpho. Her shape is an ode to her larger-than-life personality. She is definitely the matriarch of the family. Gramps on the other hand is a skinny bean of a man. He takes up very little space in the house and is quiet and unassuming. However, he observes everything so closely and in the end it’s his patient tinkering and exquisite mind that brings so much joy to Mpho and Grandma.” 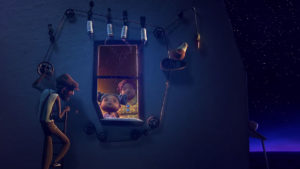 To create Snow’s distinct look, Tulips and Chimneys used a combination of stop motion and CG, creating the miniatures in-house and collaborating with BlackGinger on the animation.

It took a team of three four weeks to put together the miniature set, as just building the lounge required 24 different types of material and 31 loose items were created just to dress the kitchen. 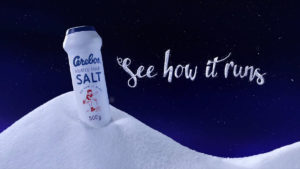 Ree says they also had a lot of fun set-decorating the exterior shots. “The textured ground was a mixture of sand, tiny pebbles and tea! We then added hundreds of tiny sprigs of rosemary that lead up to the larger bushes that were created with moss died different colours.”

“We couldn’t be happier with the result,” says FCB Durban creative director, Brandon Govender. “We wanted something out of the ordinary and decided it simply had to be animated. Tulips and Chimneys are the best in the business, and we’ve truly enjoyed working with them to bring the characters and story to life. It’s been a real labour of love for all involved.”

Tulips and Chimneys Bring Snow to South Africa in their New Spot for Cerebos and FCB Durban added by Newsroom on August 16, 2017
View all posts by Newsroom →