By Newsroom on March 22, 2016Comments Off on UFC Star Conor McGregor’s Budweiser Ad Banned by RTE in Ireland

A new Budweiser ad staring UFC superstar ‘the Nortorious’ Conor McGregor has been banned after it was deemed to be in breach of advertising regulations.

The 27 year-old’s charisma and achievements in the UFC have propelled him to the status of global sporting icon which in turn has fuelled the Irish broadcaster’s concerns that his younger fan base could be encouraged to drink alcohol after seeing McGregor fronting the brand.

RTE based its decision on the basis that the Advertising Standards Authority for Ireland (ASAI) Code which specifies that marketing should not refer to or include any ‘heroes of the young’. 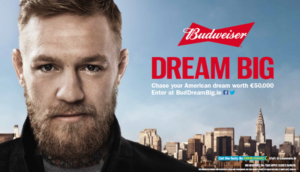 In a statement, Paul Mulligan, head of operations, RTE commercial television said the broadcaster’s clearance committee voiced concerns that the copy may not comply with the Advertising Standards Authority for Ireland (ASAI) Code.

He said: “We requested that the copy be submitted to the ASAI for a view. We had hoped we would be informed of any feedback the client may have received from the ASAI, the owner of the Code, which would confirm or allay our concerns as to whether the advertising running on a number of Television channels in Ireland breaches the Code.”

He added: “In the absence of that RTE, as a compliant media, has sought a view from the ASAI. That view has now been given that the advertising breaches section 9.7 of the ASAI Code. This complies with RTE’s initial view that the advertisement should not be broadcast and believes it took the correct and prudent action in not approving the commercials for broadcast on its Television services.”

In a statement Budweiser Ireland said it was proud to have McGregor as a brand ambassador and maintained that the ad had been vetted and approved by Copy Clear, an independent pre-vetting service.

The statement read: “Conor is an aspirational figure for people who wish to follow their dreams and ambitions. Based on independent statistics research, Conor McGregor has an overwhelming adult appeal.”